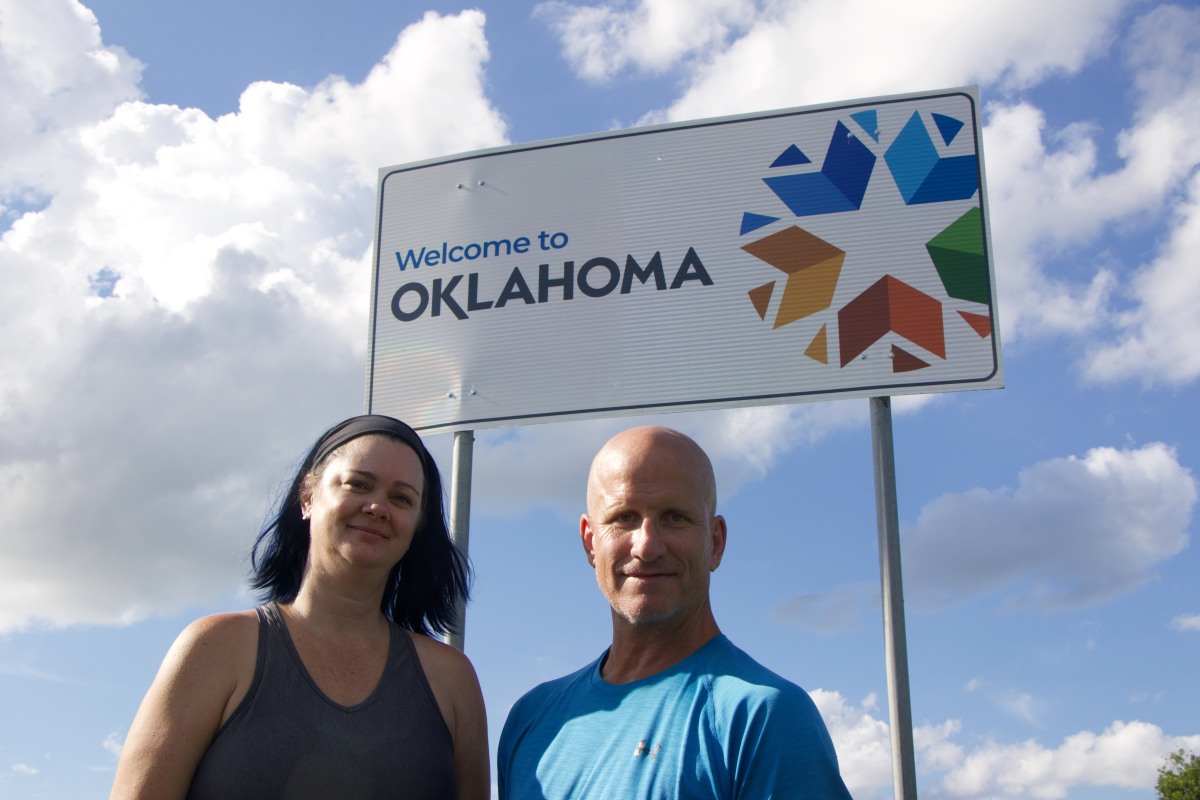 With school about to start just around the corner, Chris and I (Deah) wanted to get out of town for a few days and go camping and see some (socially distanced) sights. We packed up our car and headed north.

We stayed the first night at Broken Bow Lake, at the Beaver’s Bend State Park campground. At just $16 a spot, this campground was the perfect chance for us to get out into some nature. Since it was the end of July, it was plenty hot, but we cooled off in the Mountain Fork River, which was surprisingly cold. In the evening as we ate our dinner, we saw a fox stroll by, and with an early start the next morning, we saw families of deer and families of fishermen out enjoying the cool morning.

Okay, to tell the truth, we had forgotten a crucial part of our camping gear, so we had to call it a night after just one night and head to a city. We weren’t too far from Fort Smith, Arkansas, so we drove that way to learn about this town which was once the border between Arkansas and Indian Territory. Between the hanging deaths of 86 men by “Hanging Judge” Parker, and the years the town legalized prostitution, Fort Smith has an interesting history. They also have some delicious craft beers.

From Fort Smith, we headed back into Tahlequah to explore a little bit of the Cherokee history of the area. Although the Cherokee Supreme Court Museum and the Cherokee Prison Museum were both temporarily closed, we did a self-guided walking tour through town to learn about the founding of the town. Northeastern State University has a beautiful campus there and it’s just a beautiful area all around.

We arrived in Tulsa in a rain storm and had to sit out a bit before doing our sightseeing. Always happy to try some Mexican food, we chose El Rancho Grande, featured in this list of the 9 Best Restaurants in Tulsa (it was delicious). Later, we did enjoy the “Cathedral District” of the city with it’s massive churches, as well as the huge park called The Gathering Place along the Arkansas River. On the following day, we spent a few hours at the Gilcrease Museum, full of art and artifacts from the American West and Native Americans. Both their indoor spaces and their grounds (as well as the stunning views from some of their back areas) were a treat to walk around and take in.

A trip to Oklahoma never seems complete without a stop at Stillwater’s Eskimo Joe’s Jumpin’ Jukejoint. We sat at the bar and had a chopped beef burger and tried a local beer. The bartender suggested we stop off at Pop’s in Arcadia on our way to the capital, so we did.

Oklahoma City is a sprawling city with a vibrant downtown area. We headed first to the Centennial Land Run Monument, commemorating the date when over 50,000 people from all over the country came to claim their own corner of two million acres of land. We also visited the haunting memorial to the victims of the Oklahoma City bombing in 1995, an event I remember all too well. The memorial, and the museum next to it, is worth visiting.

We also visited the National Cowboy and Western Heritage Museum, a sprawling museum that would take days to properly see. Right now the entrants for the Prix de West art exhibition are on display, and wow, I don’t know how the judges can tell who’s winning. They are all stunning pieces of art. In addition, there are dozens of exhibits ranging from a full size rodeo, art of the American west, an entire western town named Prosperity Junction, and Native American art. And that’s just the inside! Outside the building, you can find and play in life-size replicas of a Kiowa tipi, a Pueblo cliff dwelling, a Chickasaw Council House, a train Depot, and more. There were simply not enough hours in the day to fully explore this museum (formerly known as the Cowboy Hall of Fame).

To conclude our trip, I wanted one more night near a lake, but we had to settle for a cabin rather than camp. After a fantastic lunch at Bedlam BBQ, we headed to the lake that straddles the border between Texas and Oklahoma, and found Willow Springs Marina. They have cabins, cottages, and RV sites there, as well as a marina. We had just taken a dip in the lake when suddenly the temperature dropped 14 degrees, a wind blew in, and the skies opened. We made it back to our cabin and watched the storm for a few hours. By the next morning, the sun was out and the lake was calm again. A perfect end to our week away.

Have you been to Oklahoma? There’s a surprising amount to see there- this list is by no means comprehensive! What’s your favorite thing to see in the state?