While flat, grassy plains may not sound like an interesting place to take a vacation, the panhandle of Texas actually has stunning physical nature, a fascinating history, and great food and wine options. Visitors can easily spend a few days touring this part of Texas and exploring the delights of the “llano estacado”.

With a population of around a quarter million, Lubbock is perhaps most famous for being the home of Texas Tech University, and Buddy Holly. Even if you’re just passing through Lubbock on the way to somewhere else, it’s still worth a stop at the Buddy Holly Center, and a pass through the American Windmill Museum– the largest windmill museum in the world. And, you can’t leave town without passing by George Bush, to see what holiday costume he’s been dressed in. After a quick tour of the grounds of Texas Tech University, founded in 1923, it’s worth the drive out to the Llano Estacado Winery for a tour or a tasting (currently only open for curbside pick up due to Covid-19 restrictions).

Advancing farther north into the panhandle, the city of Amarillo has its share of quirky delights as well. For starters, the historic Route 66 runs right through town, and the shops and restaurants along that stretch of road reflect the architectural styles of the Route 66 heyday, ranging from vintage 20’s motels to 40’s service stations. The 13 blocks downtown are part of the National Register of Historic Places.

If you’ve driven along any stretch of Texas highway, then you’ve probably seen signs for The Big Texan Steak Ranch. Yep, home of the 72 oz steak. Free…..if you can consume the entire meal (including shrimp cocktail, baked potato, salad, roll, and the steak itself) in under one hour. Otherwise, you gotta pay for it, at a whopping cost of $72. For a list of winners, click here.

Just like the 72 oz steak, everything else in Amarillo is big too. You can visit the 22′ tall “2nd Amendment Cowboy”, just down the road from Cadillac Ranch. An art project born of a strange union between some hippie artists in San Francisco and a billionaire from Texas, Cadillac Ranch consists of ten classic Cadillacs, buried nose-down in the Texas dirt. The art installation is free of charge to visit, and is open every day of the year. Littered with discarded half-empty cans of spray paint, visitors are welcome to add their own tag to any of the vehicle and photograph them to their hearts’ content.

After seeing some of the somewhat questionable works of man, it might be time for some nature. Just a few miles outside of Amarillo is the entrance to Palo Duro State Park, the second largest canyon in the United States. You can spend days wandering the trails by foot, horseback, or mountain bike, and camp under the stars at night in an RV, tent, or cabin. Spot deer, fox, longhorn cattle, and coyotes in the hour before dusk. In the summer, a musical titled “Texas!” has been entertaining crowds since the early 60’s. Preceded by a nightly barbecue and followed by fireworks, the show is definitely not something you want to miss if you are visiting in the summer months. If you know anyone who grew up in the state of Texas, you can bet they attended this show at least once as a kid (I know I did).

The Spanish called this region the “llano estacado”, which has frequently been translated to “staked plains”, but actually “stockaded plains” is referencing the high cliffs that form the boundary of the region. If you get off the highway and find yourself chasing down little-known sights such as the Texas-Oklahoma-New Mexico border monument, you’ll find that the Texas High Plains has a rhythm and a beauty all it’s own, no matter the season you visit. 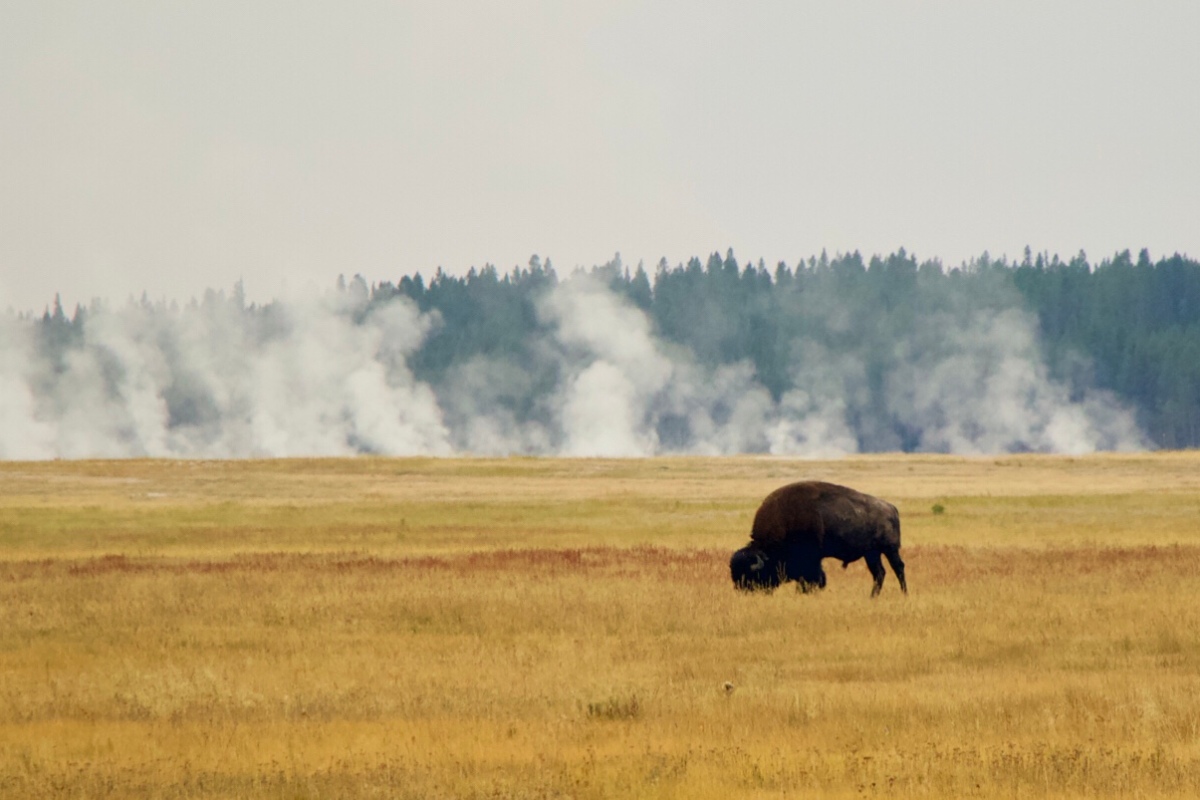 After a couple of days in Reno getting all the playa dust off of ourselves and our stuff, and generally recovering from Burning Man (does anyone ever really recover from Burning Man?), we headed to Utah. We went to Salt Lake City and their awesome Visitor Center (seriously, they gave us espressos, biscotti, popcorn, and great brochures), visited Temple Square, and also spent some time out at Antelope Island in the Great Salt Lake, where you can float in the salty water, drive amongst bison and sheep, and hike.

Heading into Idaho, we decided to stop and see Shoshone Falls, and were glad we did. It’s a beautiful park and not to be missed if you have the time for a quick stop.

Driving east, we stopped next at Craters of the Moon National Park. We camped for a night there, and visited each of the stopping points on the seven mile park loop. What a strange and fantastic landscape! The 750,000 acres of volcanic debris are the perfect setting for NASA’s Mars experiments, and gives the visitor a glimpse into what our world looked like in the time of the volcanoes.

And then we were in Yellowstone National Park! We were able to get three nights’ at a campground, and we spent the first day going to see Old Faithful and the lower geyser basin.  On our second day, we drove to Lake Yellowstsone (it’s huge!) and also checked out the Grand Canyon of Yellowstone. On the third day, we went to Mammoth Falls and some of the other mudpots, geysers, and hot springs. And everywhere we went we saw animals, from pronghorn deer, to elk, to bison. Even though it was after Labor Day, the park was still really crowded- and the nights got down to 34 degrees! After three nights I had had enough and was ready to head south.

We drove south through Grand Teton National Park, where we saw a huge grizzly bear! Seriously huge, probably 600 pounds. That, coupled with the extreme beauty of the Tetons, made it an awesome day. A park not to be missed.

We drove through Cheyenne, WY next, and stopped for some excellent barbecue at Tasty Bones, and visited a really great- and free!- museum on Wyoming’s history.  Some surprisingly interesting stuff in there!

Instead of taking the boring ol’ highway south, we drove through Rocky Mountain National Park on the way from Cheyenne to Colorado Springs. We timed our drive around sunset, and saw tons of elk and deer, as well as some beautiful fall colors. We spent the night in Winter Park, a very cute ski town. 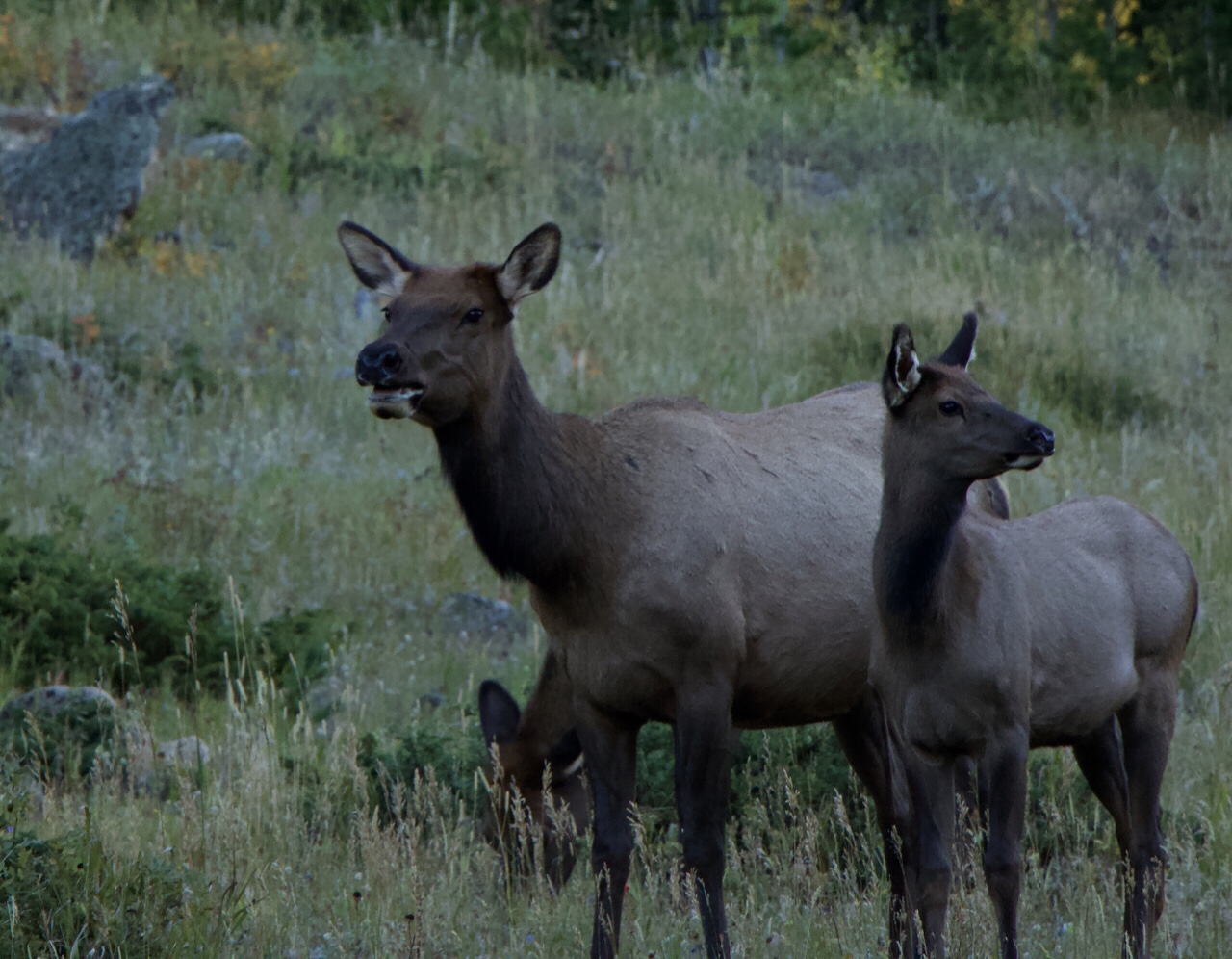 Next we spent a couple of days at Colorado Springs, home of the Air Force Academy. Mike took each of us up flying in a Cessna, so we got to see Colorado Springs from above. We also visited Garden of the Gods and drove to the top of Pike’s Peak.

Leaving Colorado Springs, we headed west a little bit and passed through Great Sand Dunes National Park. Huuuuge sand dunes! There was no way I was making it even to the top of the first one. Check out how tiny the people look in this photo below:

We arrived in Durango and spent two nights with two old friends of mine, Paul and Julie. We got to catch up with everything that’s happening in their lives, and we also got to drive out to see Mesa Verde National Park. These mesa-top alcove pueblos date back to the 13th century and give tons of clues about life in those times, while still leaving us with basic questions about the cliff dwellers.

From Durango we headed to New Mexico, where my friend Karen had invited us for an evening with her family. We spent the day wandering around Manhattan Project National Historic Park, which I really enjoyed. I had no idea there was a boys’ Ranch School on the site previously, and that it was appropriated by the War Department. We got to wander through some homes on Bathtub Row, and then we visited the Bradbury Science Museum– a super hands-on and informative museum about the Los Alamos Research Laboratory.

Between Los Alamos and Santa Fe, we had time to make a very quick stop in at Bandelier National Park- home to multi-storied alcove cliff homes dating back to the 1400s, as well as the remnants of a larger circular village named Tyuonyi, with over 500 rooms.

We walked around historic Santa Fe, including their beautiful church dating back to 1610, and of course ate tons of New Mexican food. On the way out of town, we spent the afternoon at Meow Wolf, a very interesting and strange immersive art experience. At $25, it’s pretty expensive, but it is such a unique experience that I’d recommend checking it out- there’s one coming to Denver and to Las Vegas soon. It’s too hard to describe in words so here’s a few pictures.

We took the Turquoise Trail from Santa Fe to Albuquerque, and then stayed with two of our friends from Burning Man, Alex and Debbie, at their home near Sandia Peak. A rainstorm rolled in and we watched it through the massive windows of their house, overlooking the city. We had a great evening with them as we talked about our Burning Man experiences and thoughts on the festival and travel in general.

In Albuquerque the next day, we strolled through historic old town. Our favorite part was the Albuquerque Museum, which has seven galleries, of which the New Mexico Jewelry exhibit was our favorite. Amazing craftsmanship of both old and new jewelry, ranging from silver and turquoise to feathers and other found materials. Worth going to, and a very inexpensive museum at $6.

That was our furthest point west for this leg of the trip- we turned east and passed into Texas (my home state). We stayed the night in Amarillo, where we visited Carhenge (also known as Cadillac Ranch), a series of 10 Cadillacs that were buried in a farm field back in the 60’s. From there we went through Lubbock, keeping an eye out for fun street murals and Buddy Holly memorabilia (he was from there). And then finally we arrived in Arlington, Texas, my hometown, where some catching up with family and friends will now occur!

Have you been to any of these states? What was your favorite things to see there? What part of vacations do you like best- wild animals, beautiful scenery, or catching up with friends and family?