We had planned to go to Central Asia after India, but since it’s cold and wintry there in February, we spotted a cruise that was visiting four Indian Ocean islands. After considering the prices for lodging, meals, and airfare to such remote places, the cruise turned out to be a good deal- being flexible with our dates, we were able to get a heavily discounted fare for an upcoming sailing. We signed up- and got a free $50 onboard credit from Expedia!

Leaving the Maldives, we transited through Dubai and arrived in Mauritius a few days before the cruise. The small island has a fascinating history: known to Arab traders and the Portuguese but settled by neither, it was the Dutch in 1598 that populated the island for a hundred years- and completely wiped out the Dodo bird and the black ebony trees. In 1712 came the French, who valiantly fought the British during the Napoleonic Wars- the 1810 battle of Grand Port in Mauritius was the only naval battle the French won. But… four months later the Brits returned and prevailed, taking possession of the island. After the British abolished slavery, they produced sugar cane with the labor of half a million indentured laborers from India in what was called “The Grand Experiment”. Finally, in 1968, Mauritius gained its independence.

We stayed three nights in the small village of La Gaulette on the southwest side of the island, in a fabulous roomy studio apartment (a place I really loved). We swam at La Morne beach, saw the UNESCO memorial commemorating the end of the slave trade, and teamed up with our hotel neighbors to drive to waterfalls and a nature reserve in the interior of this picturesque volcanic island. Then we moved north for two days, staying in Grand Baie, where we went scuba diving (and saw a very cool scorpionfish trying to camouflage himself next to a sunken wreck we were exploring). A barrier reef encircles the entire island of Mauritius and makes for some of the best diving in the world. That night we had a delicious Creole seafood dinner. The next morning we boarded our Costa cruise at Port Louis.

After two northbound days at sea, our first port of call was Victoria, Seychelles. The Seychelles are a collection of 115 islands, most of which are uninhabited. We felt like the tour excursions were rather pricey, so we set off on our own. We took a public bus up and over the granite spine of the island, and arrived at a postcard-perfect beach. On the other side of the street: a small shop, where we purchased cold Seybrew beers and Slow Turtle Ciders, which we enjoyed while sunbathing. The water was warm, the beach was clean, and the waves were perfect for body surfing. The next day we took another bus to Beau Vallon beach on the other side of the island, and enjoyed that one too. Some fellow cruisers we met the second day told us “This beach is just like the excursion we took yesterday except it didn’t cost €140!”.

After two and a half days in the Seychelles, we sailed southwest for one day and arrived at Nosy Be, Madagascar (“Nosy” means island, and “Be” means bay in Malagasy). Originally settled by explorers from Indonesian Borneo, Madagascar has a little different feel to it than the rest of the Indian Ocean islands- part Indonesian, part Indian, and part African, along with some remnants from European exploration as well. On Nosy Be, Chris and I took a tuk-tuk to a lemur sanctuary, where we were able to check out 15 of Madagascar’s 71 lemur species. In a “semi-free” environment, the primates live on their own little islands- they don’t like to cross water- not in cages, but fairly domesticated by this point, cared for and fed by tourists and park staff. 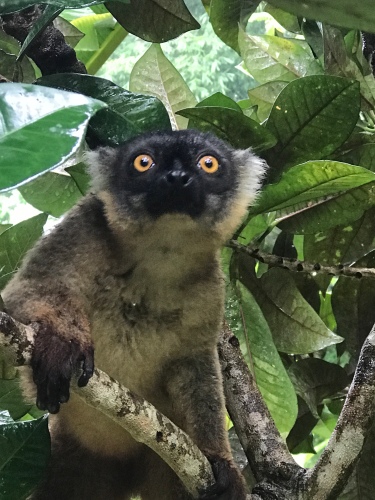 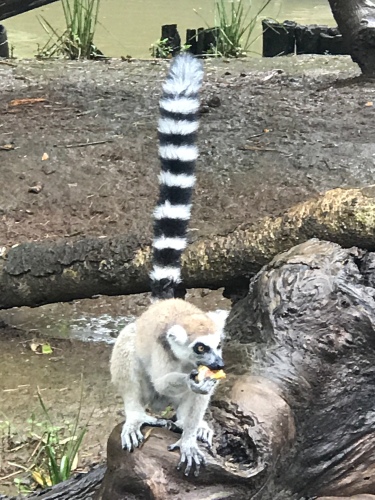 On our second day in Madagascar, our boat docked in a different city- Antsiranana, previously known as Diego Suarez. After a stroll around the small city (it was a quiet Sunday, so not much going on), we found a bar with cold Three Horses Beer and not-so-blazing-fast WiFi, and caught up on some communications.

We had another day at sea while we sailed up and around Madagascar- did I mention that our time onboard our cruise is mainly spent trying out the culinary creations of the 106 cooks, served by the 145-person restaurant(s) staff? Of course we also make time each day for the four hot tubs, two pools, theater, five clubs, two coffee bars, and the gym. Plus lying on the loungers up on the solarium deck at night watching the Southern Cross rise in the jet black sky- so clear you can see the Milky Way. It’s just beautiful.

Anyway. On our third Madagascar day, we docked at Tamatave (also called Toamasina), where we decided to visit another lemur park, because they are just so danged cute. I didn’t like this one as much, because they kept some in cages- as they are getting acclimatized to the park- but the park does stretch for acres and acres where other semi-wild lemurs roam free (we spotted two in the trees). As most of the wild lemur species are endangered, I guess this is better than losing them all.

After another day at sea, we arrived at the last of our stops in the Mascarene archipelago , the island of Reunion. Originally known as Isle de Bourbon, it’s now a French overseas department. The island is dominated by a volcanic caldera, and surrounded by both black sand and white sand beaches. Roaming around the small town of Le Port on our first day there, it seemed so European after our other stops. We found a bar and settled in for some cold beverages and people-watching. The next day, we took a bus to the beach town of St-Gilles-des-Bains, and played in the ocean for a while. Standing at the back of the boat that night, we watched the glittering lights of Reunion fade away as we headed back to Mauritius.

We arrived in Mauritius and docked, and spent the day in Port Louis, visiting some historic buildings there including the Caudan Waterfront and the Aapravasi Ghat, a UNESCO World Heritage Museum that tells the story of the 462,000 indentured servants brought from India, China, Comoros, Madagascar, and Yemen to work in sugar cane plantations. Most modern-day Mauritians are descended from these laborers, so it’s a big part of their history. It’s a good museum to visit and includes parts of the original processing buildings for the immigrants.

After one last night on the boat, we were done with our cruise. We left Port Louis, and stayed at a BandB on the southeast end of Mauritius for two more nights. Tomorrow we fly from here to South Africa, to visit some friends in Durban.

Have you been to the Indian Ocean islands? What was your favorite?