A trip through Central Asia would not be complete without a drive through the Pamir Mountains on the M41, one of the highest roadways in the world. Winding its way from Pakistan to Afghanistan, Tajikistan to Kyrgyzstan, the Pamir Highway is a must-do for travelers who want to see the best of the ‘Stans.

Chris and I flew direct from Tashkent to Dushanbe for $75 on Air Uzbek, and immediately upon arrival, the airport ATM machine ate my debit card. Luckily we have another one, so we got a cab and got settled in to the Green House Hostel for the next few days. Happily, we contacted the bank, and were able to pick up my ATM card two days later at their main office in town.

Our friend Christian was in Dushanbe on business, so while we waited to link up with a driver and/or other riders for the Pamir Highway, we hung out with him at his fancy hotel, enjoying the wine and snacks there while swapping expat stories. We also spent a couple of days walking around town and seeing the monuments in the capital city. Dushanbe is small as far as capital cities go, but with lots of parks and the native tulips were blooming everywhere.

Using some travel forums (Carivanistan is a good one), we linked up with a driver who was available for the week-long trip. Mid-April is still a bit early for the high season on the Pamir Highway- summer is more popular due to warmer temps in the high mountains- but the roads were clear so we were good to go. We spent the first day driving from Dushanbe to Qalai Khumb, a cute little town at the junction of the Khumb and Punj Rivers.

From Qalai Khumb, we followed the Punj River southeast, through the Whakan Valley, with Tajikistan on one side and Afghanistan on the other. All day we could see farmers working in their fields on both sides, shepherds watching over flocks of sheep and goats, and small settlements dotted every so often along the river. 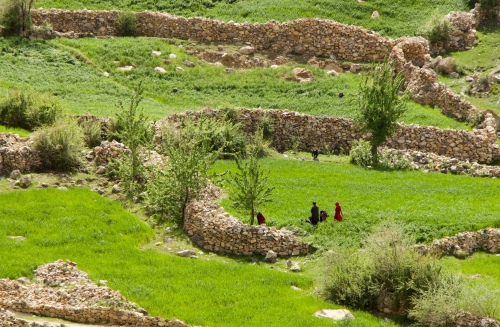 As we gained elevation into the mountains, we continued to parallel the Afghanistan border for the next two days. We stoped at a 3rd century mud fortress, and two hot springs for a soak in the hot waters. The days were cooler and the nights were crisp when we stayed at Khorugh and Ishkashim.

On the fifth day, we left the Afghanistan border and turned north, getting into the really high mountains. Here the lakes were frozen and there was snow on the peaks and slopes of the mountains. We were very grateful for the guest house owners at Langar and Murghab who had electric space heaters for us- and sad when we had to brave the freezing nights to go to the outhouse!

The last two days of the drive were at very high elevations. The Pamir Highway is often called the “Rooftop of the World” and it requires going over the Ak-Baital (White Horse) Pass at 4655 meters (15,272 feet). We crossed the border into Kyrgyzstan at 4200 meters- the 2nd highest border crossing in the world. Yay for free visas for many nationalities! It snowed the night we stayed at Sary-Tash- our tiny, one-element heater could not stave off the cold- and we awoke to a white wonderland. Thankfully we descended 1500 meters that day, and suddenly the hills were green again, and filled with herds of horses and new ponies eating the spring grasses.

The Pamir Highway ends in Osh, and after our driver Nuraly got us situated at a guest house there, we said our goodbyes. He was a great driver- very safe- and super knowledgeable about the whole area. We were lucky to have him.

It was Orthodox Easter weekend in Osh, and the first truly warm weekend they’d had all year, so everybody was out and about the town. We walked through a spring carnival (and rode the old Soviet-era Ferris wheel), and hiked Suleiman Too, the small mountain that overlooks the city. Via Twitter, we hooked up with a local who wanted to show us around town- we had a delicious shashlik (kebab) lunch and a walk through the bazaar. He also explained the fascinating tradition of bride-kidnapping here!

After a 12 hour shared-taxi minivan ride up and over a mountain pass, we arrived in the capital city, Bishkek. Originally a fortress established in 1825 to control trade caravans, by 1868 it had grown into a medium-sized Russian settlement named Pishpek. In 1925 it was declared an autonomous oblast in Russian Turkestan, then as the capital of the Kyrgyz Soviet Socialist Republic was renamed Frunze after a Bolshevik leader, and finally in 1991, it became Bishkek, the capital city of Kyrgyzstan. Got all that?

We met up with two friends-of-our-friend Sharon, and they took us hiking for May Day our in the Ala-Archa National Park. With lots of rain in the past few weeks, it was a muddy and fairly challenging hike (for me at least). There were tons of Kyrgyz people out, celebrating the holiday and a rare day of sun (this month has apparently been way more rainy than usual). At last we finished hiking and went to eat a delicious shashlik dinner, combined with Georgian khachapuri bread- a personal favorite of mine. It was a great reward after several hours of hiking!

The next day, we went on a city walk with a guide we found on IndyGuide. She showed us all around the city, all the monuments, theaters, universities, and governmental buildings. We met up with our two friends for dinner again, eating at a great steak restaurant named Obama’s- a fantastic steak and red wine. Thanks Chris and Brian for such a great dinner!

Next up for us: Kazakhstan 🇰🇿!