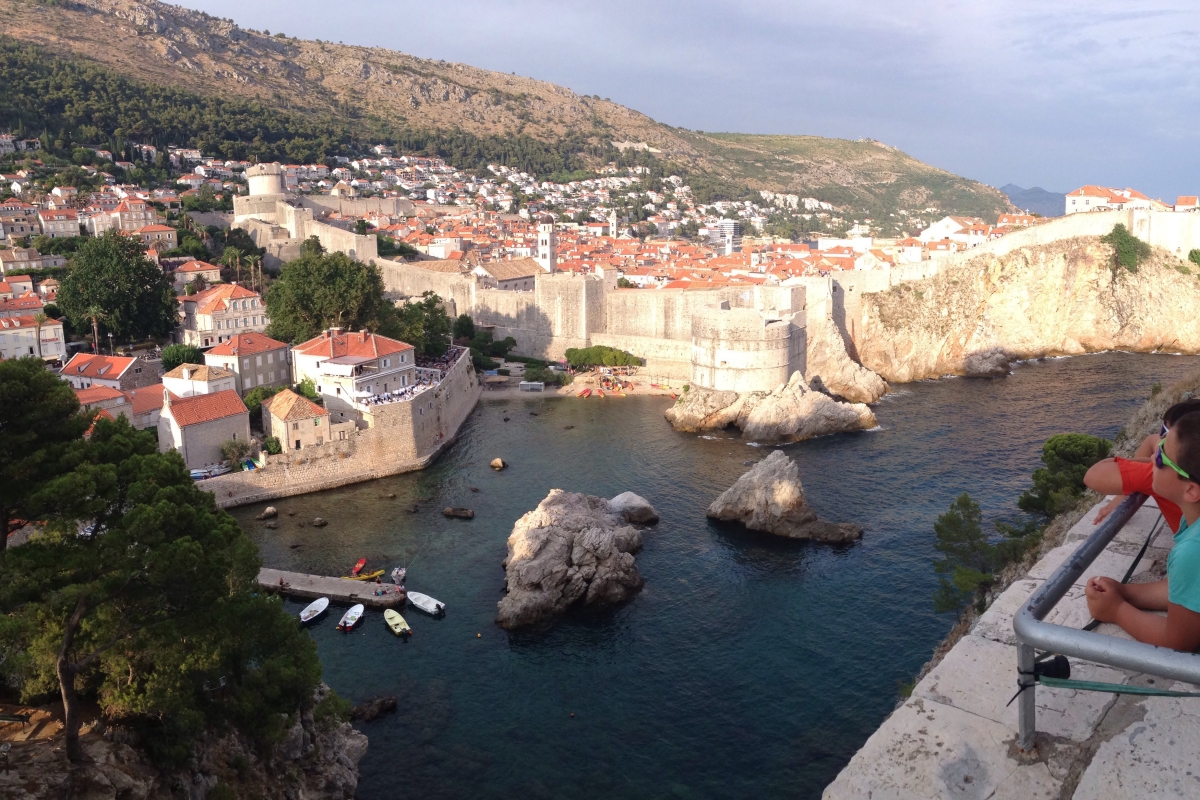 From Trieste it was only a 2 hour bus ride through Karst province (the only Slovenian word to enter the world lexicon) and then we arrived in Ljubljana.  A walking tour was starting just 15 minutes after we checked in to H2Ostel, so we hurried over and took a tour through old town. The river running through the city, with each distinctive bridge, is really lovely. We took a funicular up to the castle on top of the hill and explored all around. While we were in town, a 4 night street festival was happening, so each night there were acrobatics, stilt dancing, juggling, drum lines, etc going on.

We took a bus out to the “impossibly romantic” Lake Bled, just five miles from the Austrian border. We walked around the lake and jumped in and swam in the cold Alpine water. A small island with a castle on it completes the setting. From Lake Bled, a short 2 mile shuttle bus took us to Vintgar Gorge. A wooden walkway and paths twist and turn alongside a blue-green river coming straight out of the Julian Alps, just beautiful.

Then we were off to Zagreb, the capital of Croatia. A walking tour helped get us oriented and learn a bit about the history of the city, as well as suggest a few places to eat. We had “struk”, a strudel-like dish, twice while we were there. Omg, so good. I visited the Museum of Broken Relationships while Chris took a break to see a movie. We spent some time in a 200 year old wine cellar. We ate Sri Lankan curry. We liked Zagreb a lot.

We took a bus south to Plitvice Lakes National Park, staying at a guesthouse just outside the park. We spent two days in the park- 16 terraced lakes  that cascade down into waterfalls created by the travertine rock. The lakes stretch over four miles long, with walking paths alongside and boardwalks crossing over some lakes, allowing some stunning photos of the crystal clear water. A ferry and two trams help take visitors to the farthest reaches of the park, and then you can spend the day strolling back to one of the two main entrances. A UNESCO world heritage site, Plitvice is not to be missed.

Split, the location of Diocletian’s palace- the only Roman Emperor to ever retire from office- was next.  Built in the 4th century, the basic walls still exist, as well as the mausoleum containing Diocletian’s remains, the Temple of Jupiter, a bell tower, and two sphinxes brought from Egypt. We had a great meal in Split consisting of gnocchi with prosciutto and truffles in a Dalmatian cream sauce, and sampled some local wines. We also took a day to visit the beach in Split, our first time in the Adriatic.

Our final stop in Croatia was Dubrovnik. After a long but stunning bus ride along the coast, with views of the blue sea, green islands, and holiday villas and resorts, we arrived. Dubrovnik is the “city of stairs” and it took 326 stairs up to reach our guesthouse, or the no.3 bus all the way up and 134 steps down. Our first destination was the walled Old City, now better known as “King’s Landing” from Game of Thrones. We hiked up to the fort above the walled city to get a lovely view of the city from above at sunset. Inside the walled city, the usual mix of restaurants, ice creameries, medieval churches. Byzantine walls, and souvenir shops awaited. Rows and rows of Game of Thrones merchandise- as well as Star Wars VIII, scenes of which were also filmed there. We went to a beach in Dubrovnik as well, and watched the massive cruise ships come and go as we sipped a cool  pivo in the hot sun.

Next stop on our trip: Bosnia.