We’ve been through the El Salvador airport several times, but never actually visited the country itself, so we decided on El Salvador and Honduras for our winter break (number 92 for me, and 130 and 131 for Chris). Not really interested in visiting the capital, San Salvador, and knowing that we’d be hitting the beaches in Honduras later, we settled on visiting the mountainous area of Santa Ana first.

Santa Ana is the second biggest city in El Salvador, but has a more relaxed (and less dangerous) feel than the capital. There are coffee-growing farms nearby, and several volcanoes and a lake to explore (you do need a police/tourism escort though). Within the city, a historic area showcasing a 100+ year old theater and a Neogothic cathedral make a nice visit. The first night we were there, we saw a magic show at the theater, and were wowed by its Neoclassic French interior. I could imagine operas being performed there in the late 1800’s.

We stayed at the Casa Viejo, and were warmly welcomed by the owner, Luis, and his twin sons, and treated to a fabulous breakfast of pupusas and hot chocolate. On another day of our stay there, we made our way to the neighboring city of Chalchuapa to see the Mayan ruins of Tazumel-worth going to if you’re in the area, but not worth a special foray into El Salvador.

Anxious to get going to Honduras before transportation shut down for Christmas, we left on the 24th to make our way to Copan, first by bus out of El Salvador, then a short transit in Guatemala, and finally a bus from the Honduran border. In Copan we stayed at the Iguana Azul, which was actually the first hostel in Copan, 25 years ago- and where I stayed when visiting with Hunter 10 years ago. The Iguana Azul is simple, clean, and cheap ($18 a night for the private double room), and right next door the same owner has a bed and breakfast (La Casa de Cafe)  with a beautiful view of the valley and a first class kitchen- we had breakfast there twice and loved it. 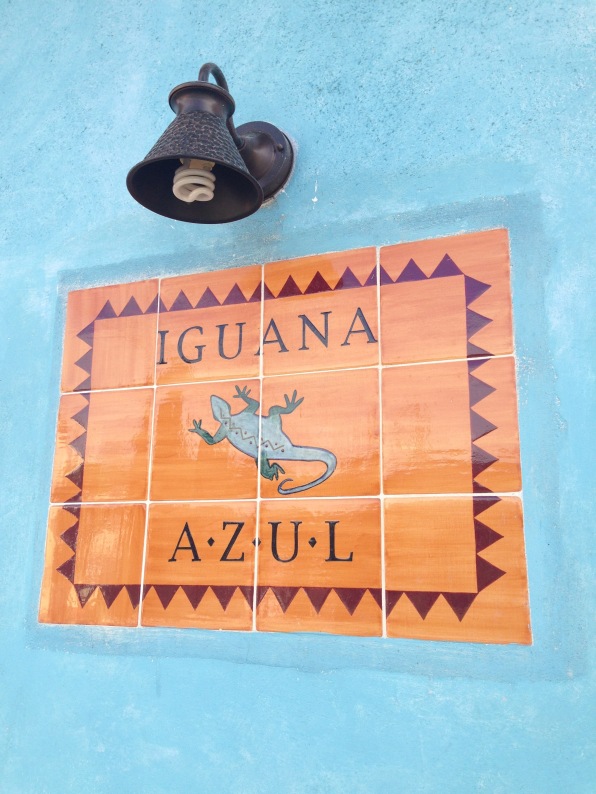 I love the Iguana Azul
Copan hasn’t changed much over the years, and we enjoyed visiting the Mayan ruins- you can spend hours just wandering around the site, climbing up and down various pyramids and trying to decipher the Hieroglyphic Stairway. The site is open every day of the year and costs $15 to visit, but it is well worth it if archaeology and history is your thing. In town there is a small museum featuring some of the pieces found inside the pyramids ($3) and as a bonus, next door there is a free photography exhibit featuring some glass plate negatives recently recovered from the 1890 excavations at Copan by the Peabody Institute in Boston (fun to see those old photographs, and think that the people in them probably lived through both the Civil War, and World War I).

From Copan we took two busses to get us up to La Ceiba,  unfortunately arriving 15 minutes after the ferry to the Bay Islands departed. We decided to spend the night up at Pico Bonito National Park, at the Jungle River Lodge. The mountain air was cool and the river water actually cold and the lack of wifi gave us time to just read and relax. 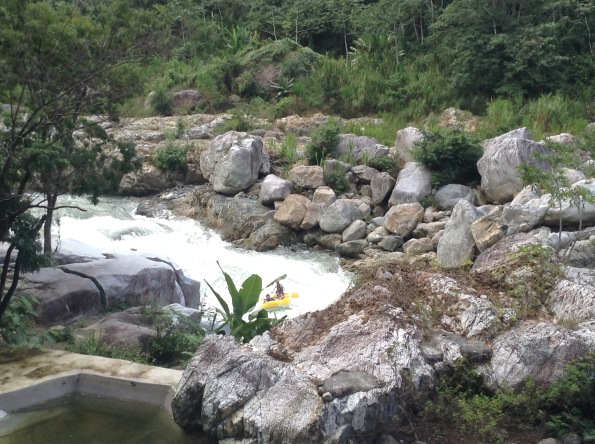 Rafters
The next day we ferried to Utila, the smallest of the Bay Islands, which had a long colonial history of warfare between the Spanish and the British (who had taken possession of British Honduras, now Belize). These days Utila is full of local restaurants, dive shops, and backpacker hotels, along with a few mid-range resorts. We settled on Bay Islands College of Diving with a ten-dive package, three nights accommodation, and two t-shirts, all for $300. The diving in Utila is considered pretty much the cheapest in the world, with a beach-and-barbecue nightlife that matches.

I dove four times over the next two days, and Chris dove six times. We saw marine wildlife such as green moray eels, flounder, great southern rays, a very cool eagle ray as it glided silently right by us, parrotfish, garden eels, spotted drumfish, lionfish (an invasive species, and as such, able to be hunted- we got to eat some lionfish that night), trunk fish, cowfish, flamingo tongue snail, banded boxer shrimp, and arrowhead crabs. Unfortunately we did not take our underwater camera with us, but it was also kind of nice to just dive and not worry about snapping pics at the same time. 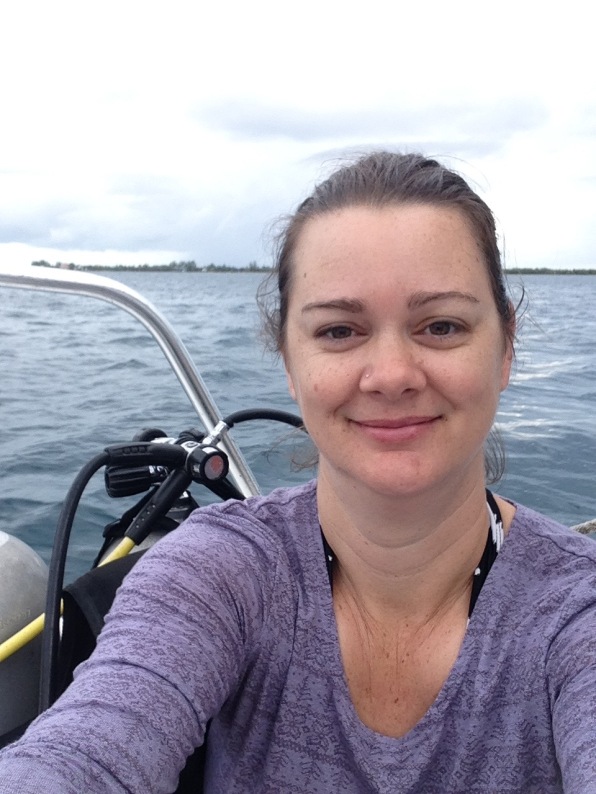 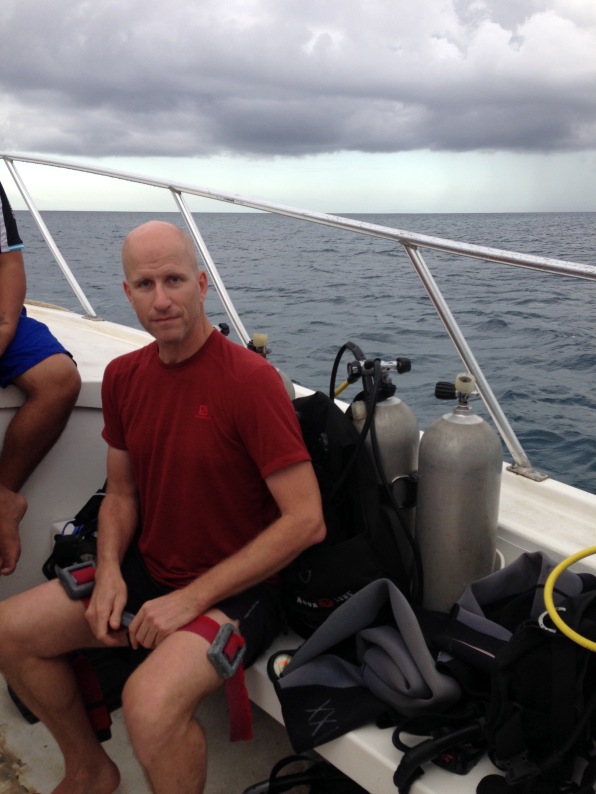 Ready to Dive!
On the 30th we took the ferry over the Roatan Island,and got a taxi to West End, where we stayed at Georphi’s in a cute little cabin, complete with a kitchenette, a hammock out front, and two lazy visiting cats. Roatan is bigger than Utila and has maybe seven small villages, each walkable in about ten minutes. In West End there are four dive shops, a dozen or so restaurants, a public beach, several mid-range hotels or guest houses and on the edges, a couple of nice resorts. For night life, there’s one night club and dozens of beach bars, and the food ranges from $5 street tacos al pastor to $100 Argentinian churrasqueria. Chris went diving in Roatan as well, but I stayed behind and participated in a New Year’s Day Bloody Mary Bar and a good book.

Roatan, Honduras
I had trouble prying Chris away from the island life- I think he’s already preparing to try to talk me into selling everything, becoming divemasters, and moving to Utila, but seeing as how mosquitos LOVE me, I was ready to head back home, hopefully to a bit of snow this next week.