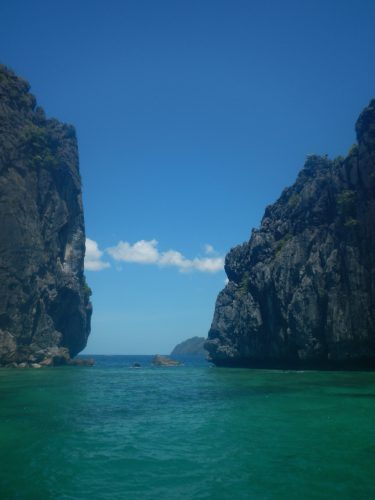 We arrived in the Philippines, without a real plan. We kept meaning to choose which islands we wanted to visit, but with over 7,000, we just got overwhelmed. So we landed in Manila early in the morning, dropped our stuff at our hotel, and looked around a bit. On the first day, we were accosted by more beggars and street children than anywhere else on our trip. Two kids cursed at us and threw something at us when we wouldn’t give them coins. So, that night in the middle of drinks at a hostel, we booked a flight for the island of Palawan, to spend a week there.

Palawan, a beautiful island. The ending scenes from the last Bourne movie were filmed there, and supposedly the book The Beach is set there, but the author changed the location to Thailand to preserve his secret hideout. Actually, the geologic formations- karst limestone mountains set in white sand islands- are the same geology as both Krabi/Phuket, Thailand, and Halon Bay, Vietnam, on the same tectonic plate. Seriously pretty.

So we stayed there a week, went diving a couple of times, hopping from island to island. The town, El Nido, is a small Spanish-influenced settlement, and has accommodations and restaurants to suit any taste. Basically we just relaxed and enjoyed ourselves, not much else to do. On one day there was a parade for Women’s Day, and some boat races that were fun to watch.

We returned to Manila and managed a few touristy activities. We visited the National museum, which was pretty good, and Intramuros, the walled city inside the old fortress.  We took a ferry out to Corregidor and did a day tour of the World War II sites out there. We visited a large mall and took care of some admin details like getting new glasses for Chris and new pants for me. We tried some unique Philippine foods, like the shaved ice concoction halo-halo, and some chicken adobo. And we got to try the street transport, including the bicycle- or motorized-tricycle and the extended, modified jeepney.

All in all, a fun time, but we probably could have planned better.  I really would have liked to visit the terraced rice fields in the north, but with an aching back for several days, I couldn’t face the nine hour bus rides.  Today we leave for Taiwan, where hopefully getting around will be a little easier.