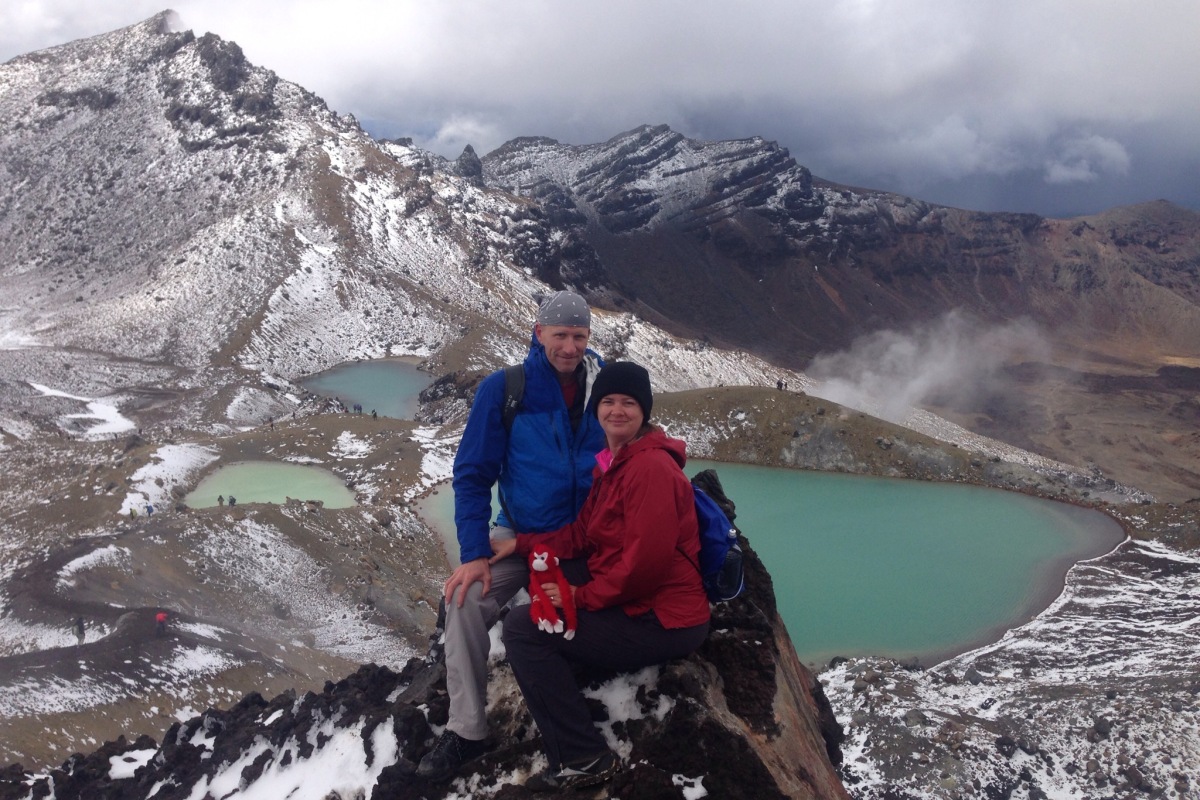 Several people we have met on our various travels have told us about how beautiful New Zealand is. So we decided to come check it out for ourselves.

We arrived super late at night and were met at the airport by Heather and Richard, who are friends of our friend Ann from NoVa. We stayed with them at their house in Auckland (actually a lime orchard) and also at their “bach house” for a holiday weekend up in Mangewhai, north of the city. They and their daughter Katherine were great hosts and a great introduction to Kiwiana.

Then we joined the Stray bus and took off for our 25 day bus adventure. Our route was 18 days long so we had a few extra days to stop in a couple of places and take in more sights. First up was Raglan, site of a surf camp and a beautiful beach. Then a day stop at Waitomo, to see the glow worm caves. Chris rapelled into his, while I took the more sedate boat ride. Then we visited a Maori lodge and spent the night, along with songs, chants, and storytelling. The next day found us visiting a hot sulfur springs park, and then a night at another Maori camp for a hangi, a traditional Maori dinner (a bit like a clambake, where all the food is cooked in the ground). All the Maori people we met were really nice, interesting, and very keen on using tourism as a cultural and economic catalyst. We also visited Lake Taupo- so big that Singapore could fit inside it!

On to Blue Duck Station, a conservationist farm dedicated to saving the endangered blue duck. We scored the honeymoon cabin there, and settled in for two days and two nights of amazing high country scenery, walking paths, and activity options such as horse trekking, kayaking, goat or pig hunting, and clay pigeon shooting. After resting up at Blue Duck, we were ready for the strenuous Tongariro crossing. 19 kilometers long, this trek goes around the “Mt. Doom” from Lord of the Rings, and is rated the number one day hike in NZ, a country known for their hikes (or “tramping” as they call it). The hike was great, starting around 1100 meters, getting up to 1900 meters, and finishing off around 800 meters. It snowed for an hour of our six hour hike, but we didn’t mind because the white snow on the black volcanic soil, and the blue glacial lakes, were all stunning.
Thankfully our hotel that night had a hot tub, so we all piled in and celebrated our success.

The next day, after a short stop in Taihape for some gumboot throwing (yes, it’s a thing here), we arrived in Wellington. Chris and I stayed two extra days in town, to rest up a bit and also to go to the very cool Weta workshop, where they made special effects for movies such as The Hobbit(s), Lord of the Rings, District 9, and Avatar. We visited the national museum, Te Papa, home of the giant squid. And we did a nice hike up Mt Victoria, overlooking the city and the bay.

We joined our new bus group and rode the ferry to the South Island. Our first stop was the city of Nelson, where one activity on offer was skydiving. Which, on a whim, I did! It was actually really really fun and not scary. What a view!

We stayed two days at the Abel Tasman national park, and we did a half day sail/ half day walk combo. Amazingly, right at the end of our sail we encountered a huge pod of dolphins- between 80 and 100- just swimming and playing and investigating our boat. It was magical. Dolphin life looks so fun.

On down the west coast, with a quick stop at the the Pancake Rocks, a rare geological formation, and then two days at Franz Josef Glacier. They had been socked in for two days prior, but fortunately for us, on our day the weather cleared and we were able to take a helicopter ride up to the glacier, do a three hour ice hike, and helicopter back down. “Hike on a glacier” had been on Chris’s bucket list, so now that is done. And we really loved it.

After that, we got a good look at the other glacier in New Zealand, the Fox glacier, and did some sightseeing at some glacial lakes and blue pools, which retain their icy blue color due to actual pieces of glacier crystals suspended in the water. So pretty. Then we arrived in Queenstown, where we took another pause to rest up and explore the city. We took a day cruise around Milford Sound- wow! A New Zealand must see.

Finally, one last leg of our Stray bus journey- to Mt Cook (where we won a $50 pub quiz and sang karaoke) and then the Rangitata area and the Peel Forest (where our lodge had a new litter of month old puppies). Then we got off the bus in Christchurch, and witnessed the devastation from the two earthquakes that happened three years ago. But, the city is rebuilding and will be stronger than ever. As the city is on a fault line, they are now building all their structures to withstand a 10 magnitude earthquake. And, they have the Antarctica museum there. In the airport grounds, the Antarctica museum is a very comprehensive look at polar life. You can ride in a polar ice vehicle (a Hagglund), see the blue penguins bring fed, experience an arctic storm in their ice room, and watch a 4D movie shot in Antarctica. And learn about the various polar explorers, and the base camps currently in place on the continent.

All in all, the weather has ranged from balmy spring to fairly cold winter. It will be a big change compared to our next destination, Papua New Guinea. We will only be there ten days, so check back soon for our next update.