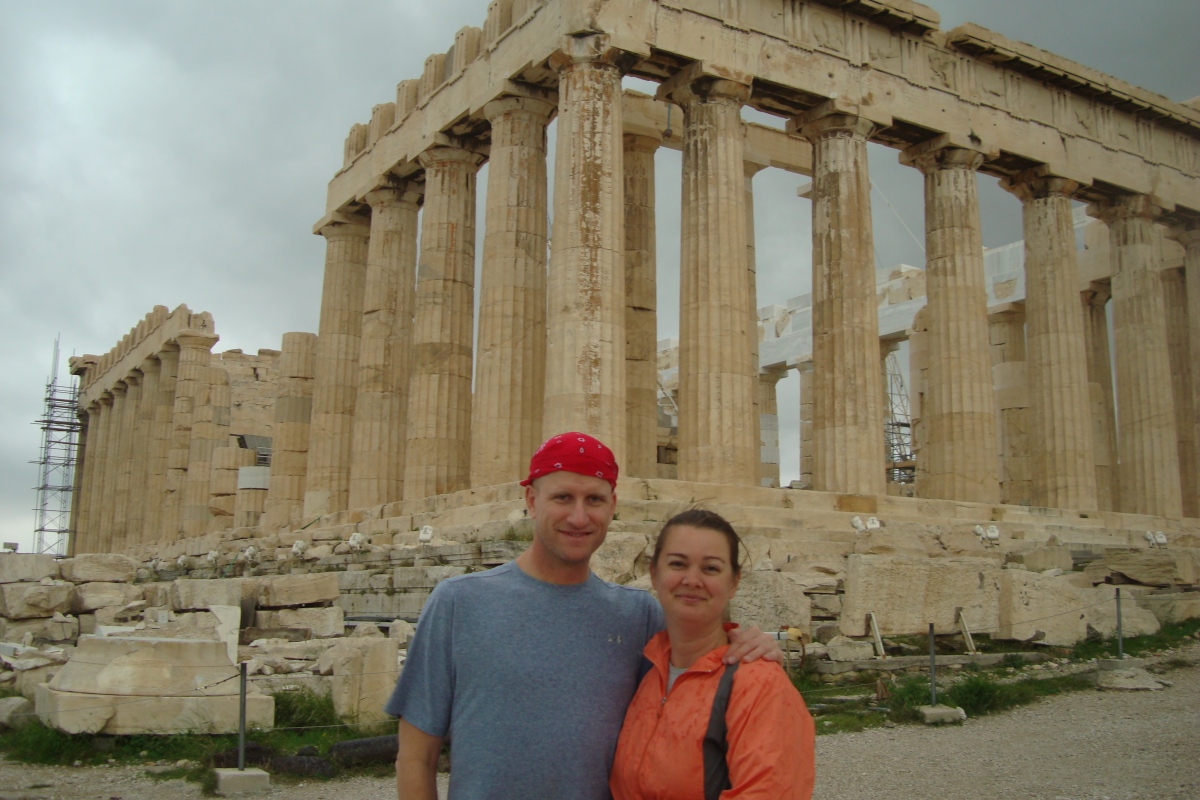 This most recent vacation was really special to me, because it was the first vacation in a long time that Chris and I were able to actually fly to together!  Although we often meet up with each other in a new city or country, it is rare that we are both flying from the same place.  In fact, the last time we were on a flight together was three years ago when we flew to Sao Tome for Christmas!  So it was really nice to be able to fly to Istanbul and then Athens together last week.

We had a long layover in Istanbul and discovered that transit passengers could go on a free day tour of Istanbul.  The airline handled everything and we had a wonderful breakfast, tour, and lunch with a small group of 10, and then back to the airport.  We flew on to Greece the same day and arrived in Athens in the early evening.

Super tired (our flight had left Khartoum at 3:30 am), we slept well and were ready to go see the Acropolis on Thursday.  The huge outcropping of rock with the remains of the temples on it was amazing!  It started to rain, but we really didn’t even mind, as we have spent these last long weeks in the hot dry desert, so the rain to us felt wonderful.

We spent the rest of the day and the next exploring Athens, looking for cozy tavernas to sit in and drink wine, ouzo, and beer while trying dishes such as souvlaki, moussaka, and of course lots of Greek salads.

Sadly, on Sunday Chris had to leave for work, so I headed up to Delphi to see the oracle and get any advice.  Getting off the bus at the same time as me were two Americans that, it turned out, are teaching in Qatar.  We found a hotel and did some sightseeing, and soon met another lonely traveler who was looking for adventure and had a car.  We all agreed to stay in Delphi another day, eat lots of pork souvlaki, and then head to Meteora together.

On Tuesday we drove up to Meteora and explored the fabulous monasteries there atop the cliffs.  The weather was wonderful and it felt great to be outside.  The view from the monasteries was majestic, and that night we stayed in the beautiful Guesthouse Iridanos, where we had a fireplace in our room and a balcony overlooking the mountains. The owner recommended a restaurant in the town of Kalambaka, which was delicious.

I headed north next, to Thessaloniki, and spent two days there.  Another day of rainy weather, but to me the cool fall weather was a welcome change and I was determined to relish it while I could.  It was bacon for breakfast, pork souvlaki for lunch, and grilled pork chops for dinner, as all too soon it would be time to head back to Khartoum.  In between stuffing myself, I found some Macedonian museums and Byzantine churches to explore as well.

After taking the night train from Thessaloniki to Istanbul, I had two days in the East/West capital and revisited some of my favorite sights of that city.  The Hagia Sophia, the Blue Mosque, the Basilica Cistern are wondrous and I will likely never get tired of them.  I was looking for some of the hanging Turkish lanterns and trying to avoid the ubiquitous carpet sellers while I shopped my way through the Grand Bazaar.  Sadly, the hour did arrive and I was on my way back to Sudan.  Luckily, it’s a bit cooler now that it is November, and with the Caledonian Society ball and a retreat to the Nile River planned for the next two weekends, time should pass quickly and then Adam, Hussam, and I will be on our way to Mt. Kilimanjaro!