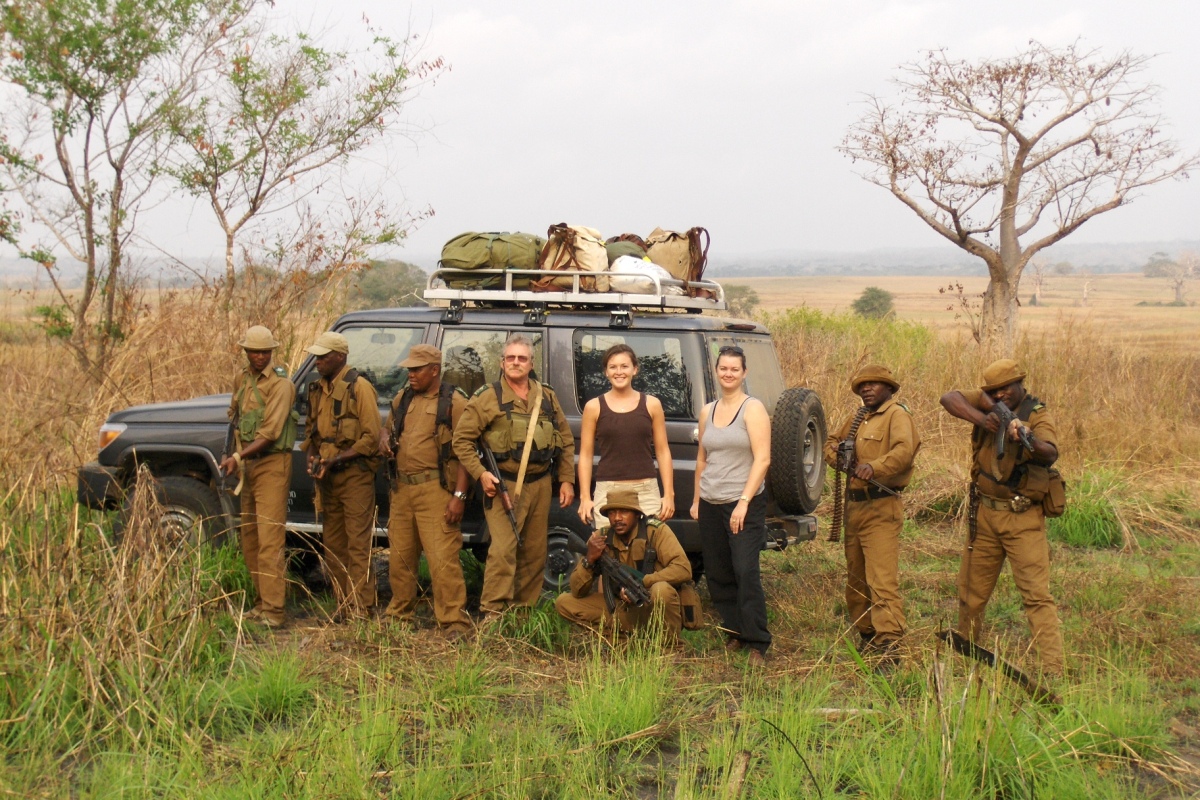 I spent this past week driving around Kissama (Quiçama) Game Park, which is 1 million hectares (2.2 million acres).  Of course we didn’t drive through the whole thing.  About 1/4 of the park is fenced in and that is where the majority of the animals, such as elephants, giraffes, zebras, and more are.

Our task was to drive around to about 40 villages located within the park and ask the sobas (the head man of each village) when was the last time they saw any big game.  We were trying to determine if there are any elephants or palancas left in the park- most of the big game were shot for meat during the 30 years of Angolan civil war here.  We went to villages that consisted of maybe 10-15 huts, no roads, no electricity, and no running water.  The villages don’t have cattle because of the tse-tse flies. These are areas of Angola that the colonizing Portuguese never even went into for that reason (and the malaria).

Each village we went to, the soba would invite us into the ondjaingo (a large round thatched hut that they use for a type of town hall meeting, where villagers take their complaints or they have celebrations).  They would greet us and the game warden would ask his questions.  Roland, the game warden, has only been in this area once in his six years as warden- and before that, it had been 30 years since a warden visited.  So they had had two visits from park officials in the last 35 years.  I sensed that most of the villages had not seen a white woman in years, and some of the children, perhaps never.  It is very uncommon for a woman here to travel into the bush.

Roland is the game warden and who oversaw the “Operation Noah’s Ark” six years ago, in which 200 animals were flown in from South African game parks to repopulate Angola’s parks.  He is also former South African Special Forces.  Along with us, we had two men from the Angolan Ministry of the Environment, who were there to check on the conservation and management of the park (it seems there were some tensions between them and the park manager, so I tried to keep my mouth shut and my ears open. Millions of dollars are at stake for managing this land). I got to practice my Portuguese a lot this week!  Also we had Meghan, the ambassador’s niece, who is in vet school and had just finished a 4 week “Vets in the Wild” program in Kruger park in South Africa.  In addition, we had 7 armed Angolan guards/ trackers that work for the national park- all former military and some former poachers.  We were armed for two reasons- one, the animals, but also because there have been firefights with poachers in some areas of the parks.  As these villages are on national park lands, they are not allowed to hunt the animals…. even though they domesticate no animals besides the pig and only cultivate cassava (manioc)as a food crop.

So, we drove around for 5 days, asking villagers about the animals, and also asking questions such as “How many children are in your village?”. (Rural Angolan women average 7.7 births each). “Do you have a school? Do you have a generator?  Do you cultivate any crops?  Do you have any animals?  Are you going to vote in the election in September?  Has anyone from MPLA visited this village lately?  Has anyone from UNITA visted?  When was the last time a car came through here?”.  Some places said they saw a car maybe once a week. Some villages had brand new shiny bikes that had just been delivered from MPLA (the party of the current- and only- president).

We drove for 7 to 8 hours each day, but only covered between 60 and 100 kilometers (40 to 65 miles).  It was very rough travel.  We got stuck fording streams and got multiple flat tires (we had two land cruisers and a pick up truck with our supplies, and we all had extra tires).  One land cruiser tipped over when it fell into a hole (I was in it, and it was scary!  The guards all had to tip it back the right way while Roland tried to drive out of the hole in the ground.  I just hung on to the door handle).  The brush was higher than the car- 3 meters (9 feet) tall.  We were never on a paved road the whole trip- just dirt tracks.  We camped on the ground each night under mosquito nets- no tents- and it was beautiful to look up and see the moon and the Southern Cross.  The a/c didn’t work so well in the cars so we often had the windows open, so if you weren’t in the lead car you got plenty dusty (I washed my hair three times when I got home).  Chris sent me with 12 bottles of water and 12 MRE’s and that was what I ate all week.

All in all, it was an interesting trip.  It was not what I would call “fun”.  But certainly educational and enlightening, and as Roland said, a historical trip. Some interesting facts about Angola:  77.2% of their budget comes from oil money…. they produce 1.9 million barrels of oil per day….  they have one of the fastest growing economies in the world (due to oil production and prices)…. yet have some of the poorest citizens in the world.

This next month should be interesting. I’ll be in Portugal for 10 days, then as soon as I get back, Chris and I will be heading north to observe the elections in another province.  The elections are for the Assembly (Congress, basically), not the President (there has not been a Presidential election here since ’92, and the president has actually been in power since 1979).  Hopefully the elections will be peaceful.  MPLA dominates now but perhaps more UNITA will be elected as a backlash to the incredible governmental waste and corruption that is present here. Angola is certainly a country that is ripe for change.