So many forts! So many palaces! The area surrounding Delhi and Rajasthan is endlessly fascinating. Chris and I arrived by overnight train in Delhi from Varanasi on December 1, and quickly realized that a car-and-driver tour would be the best way to see all the sites around Rajasthan that we wanted to get to. Happily, the hotel I chose in the Paharganj area, Hindustan Backpacker Heaven, had a tour desk, and within an hour we were booked, paid up, and ready to start.

We met our driver, Singh, and on our first day he drove us all around Delhi. Our first stop was the Jama Masjid (the Friday Mosque), India’s largest mosque- it holds 25,000. Built by the Muslim Mughal dynasty in 1644, it was and is sight to behold, sitting next to the Red Fort. Later in the day, we visited Mahatma Gandhi’s memorial site, Humayun’s tomb, the Lodi Gardens, and India Gate. For such a busy city, Delhi has a surprising amount of land still set aside for parks and memorials.

The next day, we set off for Agra, stopping in at Agra Fort first. Built by Emperor Akbar in 1565, it is a twin to the one in Delhi. His grandson, Shah Jahan, built the Taj Mahal, and his son Aurangzeb imprisoned his father for the last eight years of his life in the Agra Fort, only able to gaze across the river at the massive marble mausoleum of his beloved wife.

Early the next morning, we left our hotel to visit the Taj Mahal, watching the sun rise and light up the marble as the day brightened. It was an emotional moment for me, as I’ve wanted to see the Taj Mahal for many years now. It really felt like a “bucket list” item finally being achieved. Not just the marble building and the mosques, but the gardens and the water features inside the complex are amazing, and such a nice respite from the hustle and bustle of the city.

On our way out of Agra, we stopped at the third UNESCO site, Fatehpur Sikri. The Mughal dynasty kings were some amazing builders!

We spent the next two days in Jaipur. We visited the Hindu monkey temple, Gal Bagh. The monkeys there are very tame and quite friendly, and used to being hand-fed by tourists. I was only a little bit scared of getting rabies.

Jaipur is famous for its Amber Fort, set high on a ridge, and we walked up the curving paths next to huge elephants carrying tourists, seated in the howdahs. Named for the Hindu goddess Amba (not the yellow color of the fort), the royal city is a blend of the cultures of the Muslim Rajput rulers and the Hindu population.

The next day we spent exploring the City Palace, which houses an excellent museum of textiles of the court, armaments, the two largest silver objects in the world (!), and a surprising array of photographs of the court from the 1860s, taken by the Maharajah himself.

For just one night, we stopped in the small lake-town of Pushkar, which means “lotus flower”. There, one of the few temples dedicated to the Hindu god Brahma sits atop a hill. Brahma, angered by the deaths of his children, once threw a lotus flower at a demon, killing him. Where the lotus flower landed, this lake came into being.

Udaipur is sometimes called “the Venice of India”, because it is situated on three lakes, and you can take water taxis to different locations. However, while we were there, all the water taxis- as well as all the five star hotels and rental cars- were completely booked out, due to a massive, high-powered wedding taking place. While we were there, Hillary Clinton arrived, as did John Kerry, Beyoncé, Taylor Swift, Priyanka Chopra, Nick Jonas, and more. We didn’t get to see the palace, but we also didn’t mind taking a little break and just wandering around the artists’ alleyways. I bought a silk skirt and was severely tempted by some of the jewelry there.

I am happy that we arranged to have Singh drive us around, because we got to see some out-of-the-way locations like the huge Jain temple at Ranakpur. Built in 1492, it is truly a work of art. The intricate carving is just beautiful, and it was interesting to hear about the teachings of the Jains, and share a lunch with them as well (they don’t eat animal products or vegetables that grow in the ground, but the lunch was still very tasty!).

Yes, this is where the riding pants come from! It is also home to Mehranghar Fort, built in 1459- which Rudyard Kipling once described as “the work of angels and giants”. The fort sits on a massive ridge and overlooks the “Blue City”, where Brahmin families could paint their homes in shades of blue (it was thought to repel insects as well). Jodhpur is known for its spices, which I would love to buy, but I can’t have my backpack smelling like turmeric for the next year! We stayed in a beautiful old haveli (a heritage home that was once a nobleman’s mansion) just outside the fort walls.

Heading into the Thar desert, we came to Jaisalmer- not very far from the Pakistan border. Here the massive fort really looks like a sandcastle rising up out of the sand. When the sun hits the sandstone, it turns it a deep yellow color, earning this city the nickname “Golden City”. Unlike India’s other forts, this one is still a working fort, in that regular people still live within it, in addition to shops, temples, hotels, and cafes.

One of the best things to do in Jaisalmer is head out to the desert for a camel safari. We rode our camels out to huge sand dunes and watched the sun set. Then we had a delicious dinner, and watched some dancing set to music using castañas and a harmonium. We slept in a very fancy tent that night, and woke up at 2 am to go out and look at the Geminids Meteor shower. With no light pollution out in the desert, the brilliant stars and the Milky Way were clear and bright. 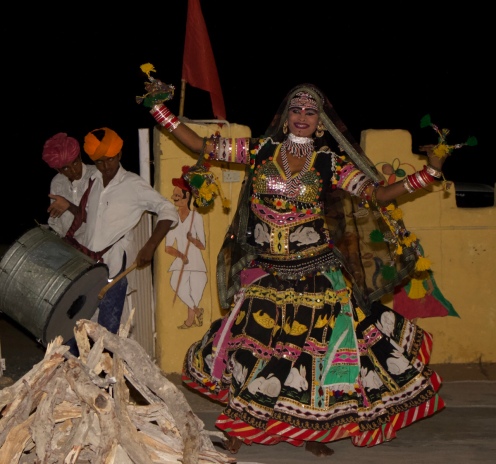 On the way to Bikaner, we stopped at a cow care center. In addition to treating cows with blindness, cancer, and other diseases, they also treat cows who need surgery due to car accidents. Because cows in India are considered sacred (living embodiments of the Earth Mother goddess), most are not fenced in (and Hindus do not eat beef). While this leads to a peaceful peripatetic life for the cow, it also leads to some pretty serious car accidents, piles of cow poop in every city (except Calcutta, which does not allow free-range cows), and cows eating all kinds of trash such as plastic and paper- which can be fatal for the cow.

Leaving Bikaner, we first visited the Karni Mata rat temple. According to a Hindu legend, the god Karni Mata was promised that all his sons would be reincarnated as rats, and so they are revered at this temple.

In the town of Mandawa, we walked through the quiet backstreets, gazing at the old havelis in various states of disrepair. Some are being gutted and torn down, their fixtures sold to tourists and to other haveli owners, who are renovating their family mansions and turning them into guest houses.

Finally we arrived back in Delhi, and said goodbye to our wonderful driver Singh. Next we’ll head further north in India and explore there a bit.

Transport to: $40 Overnight train to Delhi