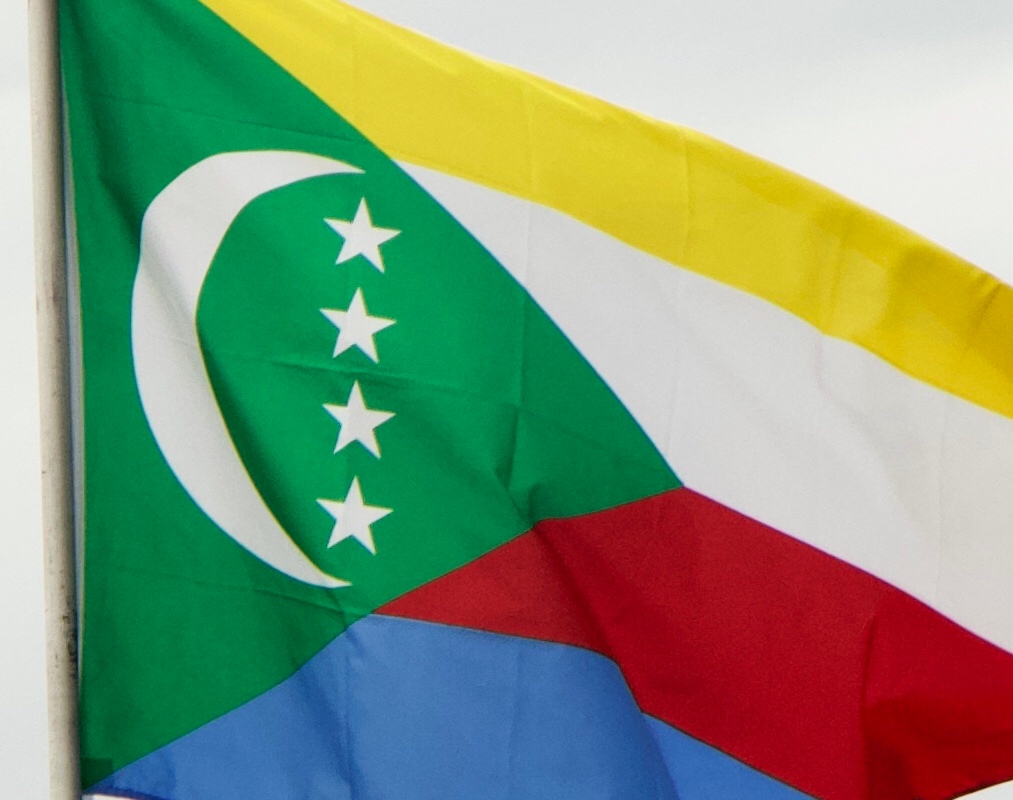 Ranked as #193 in the world as far as tourism, it’s not easy finding information on Comoros. But since we were in the Indian Ocean area, Chris and I were determined to visit. After much research into finding a flight, a plan began to come together. Here’s all the information I could gather, in the hopes that it helps other travelers who want to see this seldom-visited island nation. 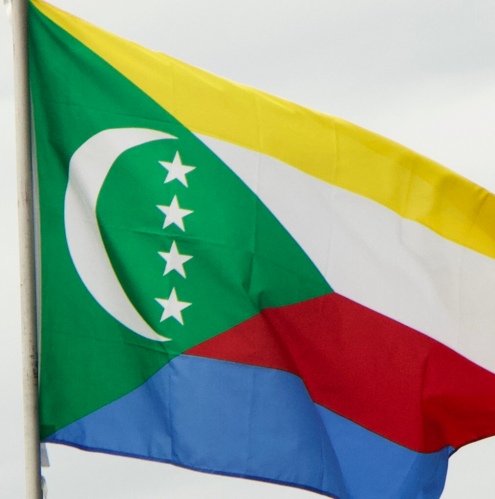 Where is Comoros and how do you get there?

The Comoros archipelago is located northwest of Madagascar and due east of Tanzania/ Mozambique.

Only a few airlines fly to Comoros. Among them are Air France (from Paris, stopping in Amsterdam and Nairobi), Ethiopian Air (stopping in Madagascar), Air Tanzania, Kenya Airways, Air Madagascar, and Air Austral (from Reunion). Not all of these flights go every day of the week, so you have to be flexible with your dates when you do your searches, and some of these flights don’t show up in Skyscanner or AirGorilla, so it’s best to go directly to the airlines’ websites. In June 2019, there will be a Turkish Airlines flight from Istanbul (only through September, from what I could understand).

The visa (available upon arrival) was either $50 or 30€- so definitely try to bring some euros with you! It’s a much better deal.

There was an ATM at the tiny international airport, but it didn’t work. There are two ATMs in Moroni, the capital- the Exim bank machine takes Visa cards, while the BCC bank takes MasterCard (both on the same street as the National Museum). The Golden Tulip Resort has an ATM machine as well.

How do you get around the islands?

Comoros is made up of three main islands, and there are flights between them on AB Aviation and on Inter Isle airlines. These flights are notorious for being cancelled for weather or other undisclosed reasons, so some people take a speedboat between islands. These can be arranged via your hotel or guesthouse, and cost about what the flights cost, around 150 Euros.

We only visited Grand Comoros, using taxis to get around. The island also has small buses, which look like shuttle vans. There’s a “bus station” that is really just a bus stop at the north and at the south of Moroni, where these buses pass through and you can hop on. Taxis anywhere in Moroni should cost 200 Comorian francs per person, and a shared taxi to the airport (if you grab one off the street near the Volovolo market) is 500 francs. Hotels will charge 20€ for an airport taxi, so if you’re good at bargaining, you can get your own for considerably less.

Where can you stay?

As of February 2019, there were about a dozen options on Booking.com for all three islands. There are another half-dozen or so on AirBnB and on Hotels.com. Some places have rooms with fans only; others have air conditioning- but be aware that power cuts are common on the island. On Grand Comore, we stayed at Jardin de la Paix, a mid-range option with a bar, terrace restaurant, and a dozen rooms. Our room only had a fan and was pretty hot and humid, but as far as I could tell, some of the other rooms have air con. We found the restaurant to be a bit overpriced, and ate most of our meals at other places nearby. The hotel only took cash, either francs or euro.

We also visited the Golden Tulip Resort. They have a variety of room options, including beach bungalows. They also have a private beach, a spa, and a restaurant. It looked really relaxing and we enjoyed a swim and a lobster lunch there.

What can you do there?

A major activity for Comoros is hiking up Mt Kerthala volcano, which can theoretically be done in one very long day, but can also be arranged as a two-day trio with porters hired to provide and carry tents, food, and water. Best not to try during the rainy season. The terrain is sharp volcanic rocks, so you really need good hiking boots with thick soles.

Of course the beaches on the islands are beautiful, and mostly deserted. Bear in mind that this is a Muslim nation, so swimming at public beaches should be done in shirts and shorts, not bikinis. Some guest houses and resorts offer private beaches and bikinis can be worn there.

In the capital city of Moroni, there is a small national museum, which costs 1000 francs for foreigners and takes half an hour to visit. There is also a large, old mosque, and a busy outdoor market called Volovolo near the telecom building.

There is a dive shop on Grand Comore at Itsandra Resort. They offer diving and other water activities such as swimming with dolphins. They are very responsive via their Facebook page. They charge 60€ per person for a dive, with all equipment provided.

Outside of Moroni, you can see the ruins of the ancient capital city, Iconi, dating back to the 12th century. A blend of Persian and Swahili art and architecture can still be found today, but you really have to look for it. From Moroni, ask for the “BonzAmi” taxi stop- that will cost 200 francs from anywhere in Moroni- then switch to any shared taxi heading south, which will be 250 francs. Iconi is about 5km south of Moroni.

A local tour agency, Ylang Tour, may be of some help for planning activities on the ground, although they were not open the whole time we were in Moroni.

The island of Moheli has a marine nature reserve, home to a wide array of biodiversity. Created as a National Park in 1998, it extends over 400 sq kilometers.

Our hotel offered to get us a driver for the day for an island tour, but when he wanted 80 Euros, we figured we could get taxis on our own for way less. We met a couple of Peace Corps workers and once they explained the taxi system to us, we were ready to take it on! If you speak a bit of French, you can probably manage it.

What is the history of Comoros?

Originally settled by Swahili explorers, the Comoros islands were also explored by Omani sailors, who called it the “perfume islands” due to the natural crops of ylang-ylang and vanilla. Later, Madagascar sailors discovered the islands, and then the Portuguese in 1505. The French acquired the islands in the 19th century, and in 1961 the Comoros were granted autonomous rule along with Madagascar. In the 1970s (the date is a bit disputed), Comoros became independent, but the island of Mayotte elected to remain with France, as they do to this day. Since independence, Comoros has had no less than 24 coups- earning it the nickname “Cloud Coup Coup Land”.

What language do they speak?

The word Comoros is based on the Arabic word “qamar“, or moon. The older people on the islands speak Comoran, which they call Shikomoro, a Bantu language similar to Swahili. French and Arabic are also official languages, and the younger people teach themselves some English. We only learned a few words in Shikomoro, such as “Yedje” for hello, “maharaba” for thank you, and “Injema“, which basically means “I am well”. At least trying these three words will bring a smile to any Comoran’s face.

What will it cost you?

This is always a hard question to answer- it all depends on whether you’re looking for an easy resort vacation or a do-it-yourself budget trip. Flights into/out of Moroni will run a minimum of 500€, and if you travel between islands, add at least 150€ for each round trip. The fanciest resorts, such as Moheli Laka Lodge, run over 150€ a night, with a midsize hotel on Grand Comore costing around 65€, and some rooms in guest houses on the islands as low as 30€ per night. Dinner at a “nice” hotel for two people cost us 35€, while the small restaurant two doors down cost us half that much for grilled chicken, grilled fish, rice, and plantains. Shared taxis are very cheap, while renting a car or hiring a driver for the day can cost anywhere from 40€ to 80€. So really, it all depends on what your comfort level is and what you want to do in your time on the islands.

The most important question for travelers! Although Comoros is a Sunni Islam nation, they do allow beer- we found Three Horses Beer, from Madagascar, as well as Heineken. Most hotels will have a full bar of spirits and mixers as well. 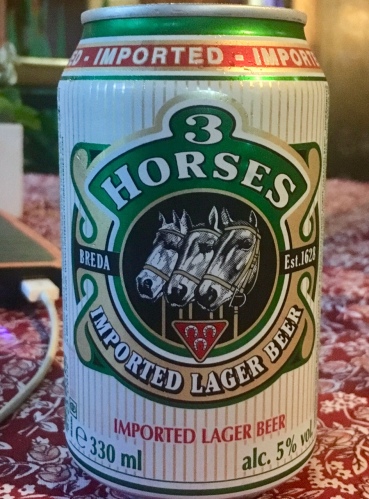 I hope this guide helps you get started with planning a trip to the Comoros! Please leave any questions and I’ll try to give an answer; or if you’ve been to Comoros and have some insight to offer, drop it here for other travelers!