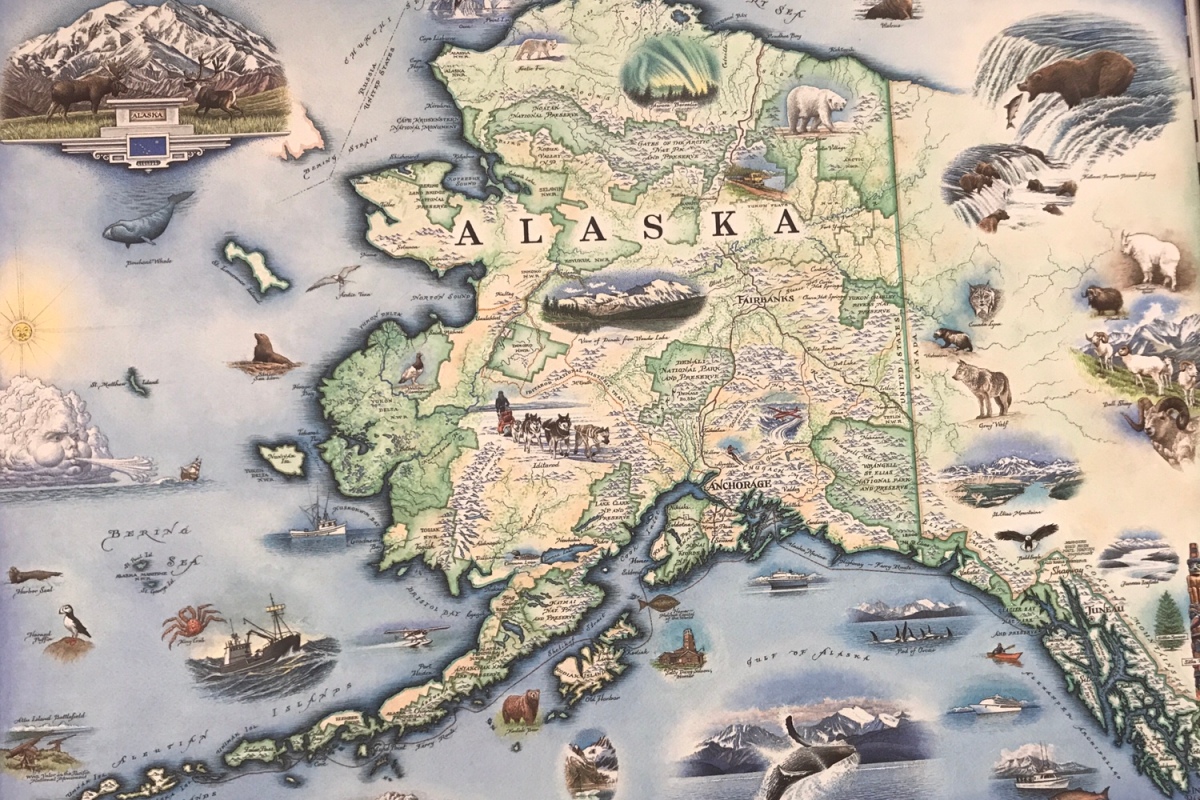 Driving the Alaska Highway in from the Yukon, we arrived in Alaska and spent our first night at a campground in Tok. The next day, after a quick stop in North Pole, we arrived in Fairbanks. We celebrated by staying in a nice B&B for the first two nights.

While in Fairbanks, we made use of the excellent Morris Thompson Cultural and Visitor Center, complete with a comprehensive museum and films about the state. Chris took a day tour to the Arctic Circle while I stayed in town and had a pedicure and watched Ocean’s Eight. We went to the Chena River Hot Springs and had a relaxing soak in the mineral waters.

From Fairbanks, we drove to Denali National Park. On the way down we had pretty clear weather and we could see the mountain and the mountain chain. We went on some hikes-amazing views of the green hills, braided rivers, and snow capped mountains in this wild 6 million acre park with only one road- and explored their visitor center, and visited the sled dog kennel. We attended a Ranger talk about how some of the animals are able to adapt to the harsh winter- fascinating stuff! Animals are so versatile. On our third day we took the bus into the interior of the park; sadly on that day it was raining and we did not have a very good view of the mountain at all. However we did get to see lots of animals: a moose and moose cub hung out in our campground, we saw three grizzlies, lots of snowshoe hares, ptarmigans, falcons, eagles, and arctic squirrels. My friend Danielle works at a shop up in Denali and so we got to hang out with her a couple times so that was really fun.

After leaving Denali we drove south, stopping in Talkeetna for an afternoon. My friend Rick worked there last summer for an air taxi company that ferries climbers onto Denali mountain, and he recommended that we stop in this cute town. Around 1100 climbers attempt to summit each year, and only half make it. Even base camp is at 7000 feet, and the summit is just over 20,000 feet. Climbers don’t use oxygen, and with -40 degree weather and winds over 100 mph, it is considered by some to be the most dangerous mountain in the world.

We arrived in Anchorage and spent two days exploring the city. While we were there we tried to arrange passage for us on the Marine Highway (the Alaska ferry) but after having difficulty with their website we jokingly wondered if maybe there was a cruise that we could take. We looked online and happily, there was one leaving in two days so without a lot of preplanning we booked it (more on that later).

In the two intervening days we drove down to the Kenai Peninsula. We drove all the way through the Chugach National Forest and out to Homer, where the western-most Alaskan road ends (there are roads further west in Alaska but you have to either fly or sail in order to get to them). We visited a small Russian town named Ninilchik and the Russian Orthodox Church there, and were wowed by the wildflowers everywhere- Alaska is surprisingly colorful in the summer! We camped along the Russian River for two nights and did a hike each evening. On one of our hikes as we were walking along the river we encountered a small black bear and her two baby cubs. They were there looking for salmon and they were able to find their dinner, and we were able to get a photo.

After the Kenai Peninsula we took a bus to Whittier, where our cruise ship departed from. It was a seven night cruise, heading south to Vancouver. The first two days were at sea, and we sailed by and stopped at the Hubbard Glacier and then Glacier Bay National Park. A park ranger came aboard and we got to learn all about this huge roadless wilderness. I have to say, it was pretty amazing to sit on deck beneath the midnight sun, keeping an eye out for whales, otters, orcas and sea lions.

On the third day we stopped at the small town of Skagway. We went on a city hike, and visited the first Gold Rush cemetery and the beautiful Reid Falls. The next day our port was Juneau, where we hiked all around the city and then up through a rain forest to Mount Roberts, and then took the tramway down- what a beautiful view!

Our last port of call was Ketchikan. This “first city of Alaska” has very temperate weather, seaplanes taking off and landing every few minutes, gold shops, and ice cold beer. We visited a hatchery and watched the salmon on their upstream run back to their spawning grounds.

After a final day at sea, our cruise docked at Vancouver, and we took the light rail to the airport and caught our flight back to Anchorage. The next day we headed north and east, and then south toward Canada, through Glacier View and Wrangell St Elias National Park. We kept stopping along the highway, trying to get in that last breath-taking photo, as if Alaska was trying to stay with us a little longer.

We drove about 1400 miles in Alaska, and cruised 1600 more. Now it’s time to explore the Pacific Northwest! Stay tuned for an update after we drive south through British Columbia, camp with friends on Vancouver Island, and visit with friends in Washington and Oregon.