After a bustling tour of Rajasthan, we were ready for some down time! We took a train from Delhi north to Rishikesh, where the Beatles once holed up in an ashram for two months to write music, also called “the yoga capital of the world”.

Instead of staying in the city, we stayed on a farm called Nature Care Village at the edge of a national forest. There wasn’t much to do there except take walks along the fields, sit and watch the dragonflies, or feed dough to the crabs in the thermal spring. The place had the most delicious food- all of it grown and prepared right there, and all vegetarian. I helped make parathas in the kitchen, learned how to collect watercress for salads, and picked herbs from the garden. One night, after watching the sun set, we had tea in a mud hut with the gypsies who lived next door. And I did some yoga, of course. A few other people were staying there, so we had some great chats with other travelers, including Amelia, who was also heading to our next destination.

The only way to get from the farm to Dharamsala, even further north, was to take an overnight bus. I hate night time buses because I can’t sleep on them, but luckily I had BingeMode podcasts to keep me company, and we arrived at the top of the mountain just in time for a spectacular sunrise from our next “home” for three days, Ram Yoga House. Ironically, I didn’t do any yoga there, although they did have a beautiful glass yoga studio on the roof. I was basically just too lazy. After sitting on our balcony watching the sun come up, we went in and got some sleep (finally!).

The only thing we did in this small town was visit the Tibetan Museum and the temple that is home to the Dalai Lama. He moved here in 1960, after fleeing a Communist China takeover of Tibet in 1959. Over the years, more than 150,000 Tibetan Buddhists have left their home country and come to live in India- knowing they can never go back. A government in exile functions here in northern India, making spiritual and political decisions for the thousands of the Tibetan diaspora.

Our last stop in northern India! Our first stop in Amritsar was the Partition Museum. The museum chronicles the 1947 Partition of India and Pakistan, when the British left the subcontinent. As Hindus moved into India and Muslims moved out, businesses were burned, families divided, homes were lost, and thousands, if not millions, of people were killed. Amritsar, being so close to the border, and a sister city to Lahore, was the last stop on Indian trains heading to the new country of Pakistan.

Later that day, we took a bus to the Wagah border, where every night there is a flag-lowering ceremony. More than 5,000 people attend every night, which has continued unbroken for over 50 years. Held in a huge stadium, there are songs, dancing, flags, cheering, and refreshments on both sides, with a closed border gate separating the Indians from the Pakistanis. Then an elite group from the Border Security Force comes out, in very elaborate costumes, and does a kind of military march/dance off with their counterpart on the other side of the gate. Fast and furious marching, high kicks, angry faces- it’s almost like a Maori haka but they also exchange sweets and greetings at major holidays. The whole exchange is carefully choreographed on both sides and has been building over time. Then the flags are- carefully, simultaneously- lowered, and everyone goes home. 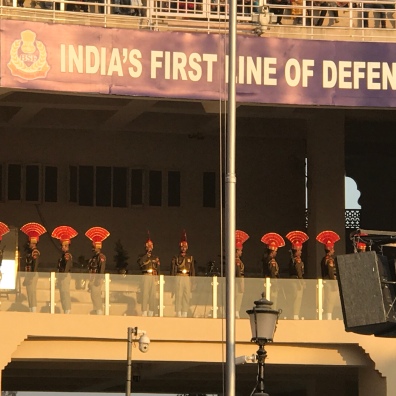 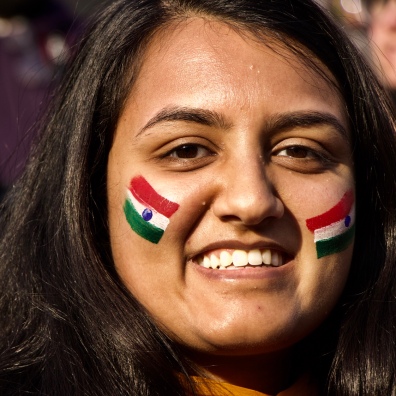 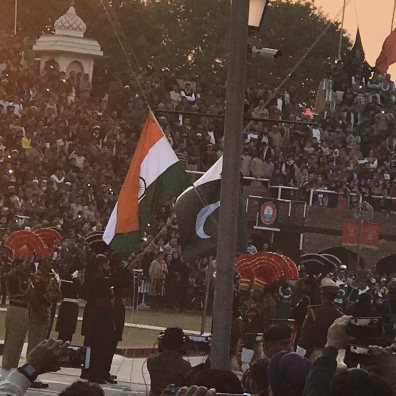 On our last day in town, we visited the Jallianwala Bagh (Garden), the site of a massacre in 1919. Punjabi freedom fighters, agitating for independence from British rule, had gathered (along with families and young couples) in the park to hold a rally. The British commander of the area had his troops open fire on the crowd, killing hundreds. Twenty years later, a Sikh survivor of the massacre assassinated the Lieutenant Governor of the Punjab region.

Finally, the monument everyone goes to Amritsar to see- the Golden Temple. Considered the holiest place for India’s 20 million Sikhs, it is the temple in which the Sikh holy book is kept. Thousands visit everyday, and a free communal meal- the Langar- is served to all. Built over 400 years ago, the Golden Temple has been destroyed many times in history by Muslim armies, as well as damaged in 1984 by an army sent by Indira Gandhi when the Sikhs tried to secede from India and create their own nation.

And now that we have been all over the north, eating all the foods, trying all the sweets, seeing all the sights- it is time to fly south to visit friends and see what’s in the lower half of India. And not a moment too soon, because it is getting cold up in the north! Sunnier climes await.

Transport to: $20 train ticket from Delhi to Haridwar