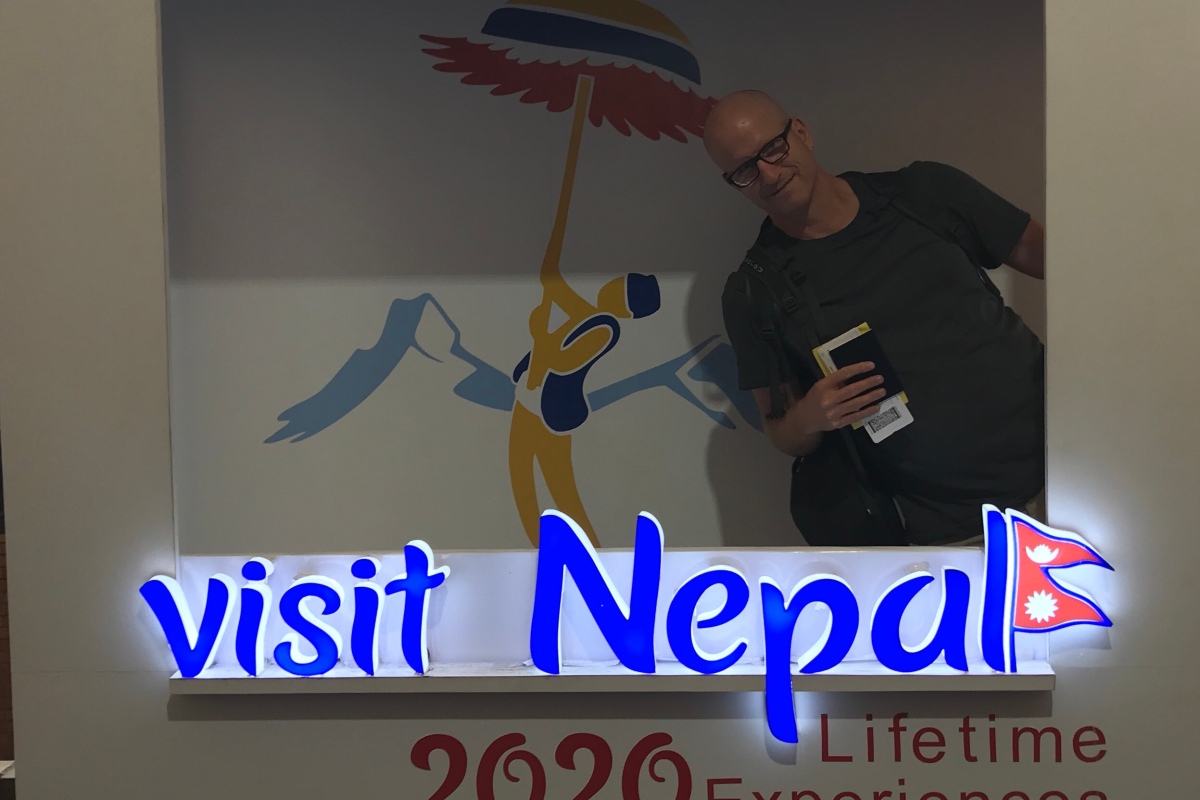 We spent four weeks in Nepal, visiting several areas. Nepal is a beautiful, hospitable and interesting country- and also trashy, polluted, and maddeningly inefficient. But let’s talk about the good stuff first!

Chris and I arrived in Kathmandu during the Hindu festival of Dashain. We stayed in Thamel, the five-block tourist zone of the busy city, and I promptly got sick. I spent 12 hours throwing up, then felt much better and didn’t have any problems the rest of the time I was there. So at least I got that out of the way. We also got to meet up with our friend Ray, our most adventurous friend, who we met on the Appalachian Trail in 2014, so that was fun!

We got our trekking permits and got an eight hour bus to Besisahar. From there we started the Annapurna Circuit trek, a roughly 150 mile hike that goes up a river valley, over a Himalayan pass, and down another river valley, with views of the Annapurna and Dhaulagiri mountains each day. For six days we trekked steadily upwards (although with plenty of maddening downhills too) through small villages, farm fields, mountain paths, and goat trails. We ate meals and stayed in small teahouses, so we didn’t have to carry tents or food. Some people take a guide or porters, but we did not (for a day-by-day blog post of our Annapurna Circuit hike, click here).

The architecture, people, and religious customs in this area are more (Buddhist) Tibetan than (Hindu) Nepalese. For centuries, trade between India and Nepal, and China and Tibet, has centered on these passes through the Himalayas. The people greet us with ” Namaste”, and most are vegetarian. The locals along the route are poor by western standards, but feeding and housing tourists, as well as farming, makes these people more well-off than those in other parts of the country.

Happily, we had excellent weather, and after six days up the Marsygandi River Valley, an acclimatization day at 3500 meters, and another two days up, we were at the high pass. Painstakingly, with one foot in front of the other, we made it over the high pass at 5400 meters, and started down the other side, along the Kali Gandaki river valley. Going down proved pretty much as hard as going up but without the fear of Acute Mountain Sickness or HAPE/HACE. After three or four days down, I decided I was done hiking and we hopped on a bus (for what was literally the most terrifying bus ride I’ve ever been on) to a pretty lakeside town, Pokhara.

We spent a couple of days resting our aching feet in Pokhara, then decided to visit Chitwan National Park. We stayed at the lovely Chitwan Village Resort, and enjoyed various activities such as a canoe ride, a jungle walk, and a Jeep safari. We saw dozens of sub-tropical birds: herons, osprey, storks, and kingfishers, as well as crocodiles, monkeys, deer, rhinos, elephants, and boars. We even encountered a wild rhino foraging in the village, watching as an exasperated farmer chased it out of his farm field.

While we were in Chitwan, the Diwali festival began. Candles everywhere, and colored-sand or colored-rice rangolis in front of everyone’s front door made the area festive. We took a bus back to Kathmandu, and visited the UNESCO Durbar Square (largely destroyed by the 2015 earthquake, and with very few signs of being reconstructed anytime soon), and Swayambhunath Buddhist temple (the monkey temple) and enjoyed walking around the streets in and near Thamel. It’s a pleasant, fairly quiet area with lots of courtyard cafes, hotels of all budget levels, and shops selling trekking gear and Nepalese souvenirs. On our last day in town, we went to visit the Temple of Boudhanath, one of the largest Buddhist stupas in the world.

Unfortunately, Nepal has a serious trash and pollution problem. High on a hill in Kathmandu, one cannot see the other side of the city due to the smog. Nepalese think nothing of dropping trash on the ground when they are done with their candies, chips, or water bottles, even at their holiest sites. This trash accumulates in every stream and on every hillside leading in and out of Kathmandu- I watched as a dump truck full of trash pulled up next to a mountain side, reversed, and then emptied its load of brightly- bagged trash straight down the hillside. Trash is burned in the streets and the villages constantly, giving off an acrid smoke as the various plastics burn. It is no wonder that most Nepalese wear face-masks for their own respiratory protection. It is extremely common to see and hear the person walking or sitting next to you hawk up a huge loogie wherever they are- indoors or out- and spit it on the ground.

So. Nepal. Beautiful country- fabulous trekking- but not the highest on my list to visit. There’s plenty of other places to vacation in Asia that have at least gotten their trash problem under control. I’m glad we came, and I’m glad we’re going. I think Nepal would be a difficult place to work and live in.

Flight: $0 (we used airline points to get from DC to here)

Have you been to Nepal? What were your impressions?

One thought on “Nepal”