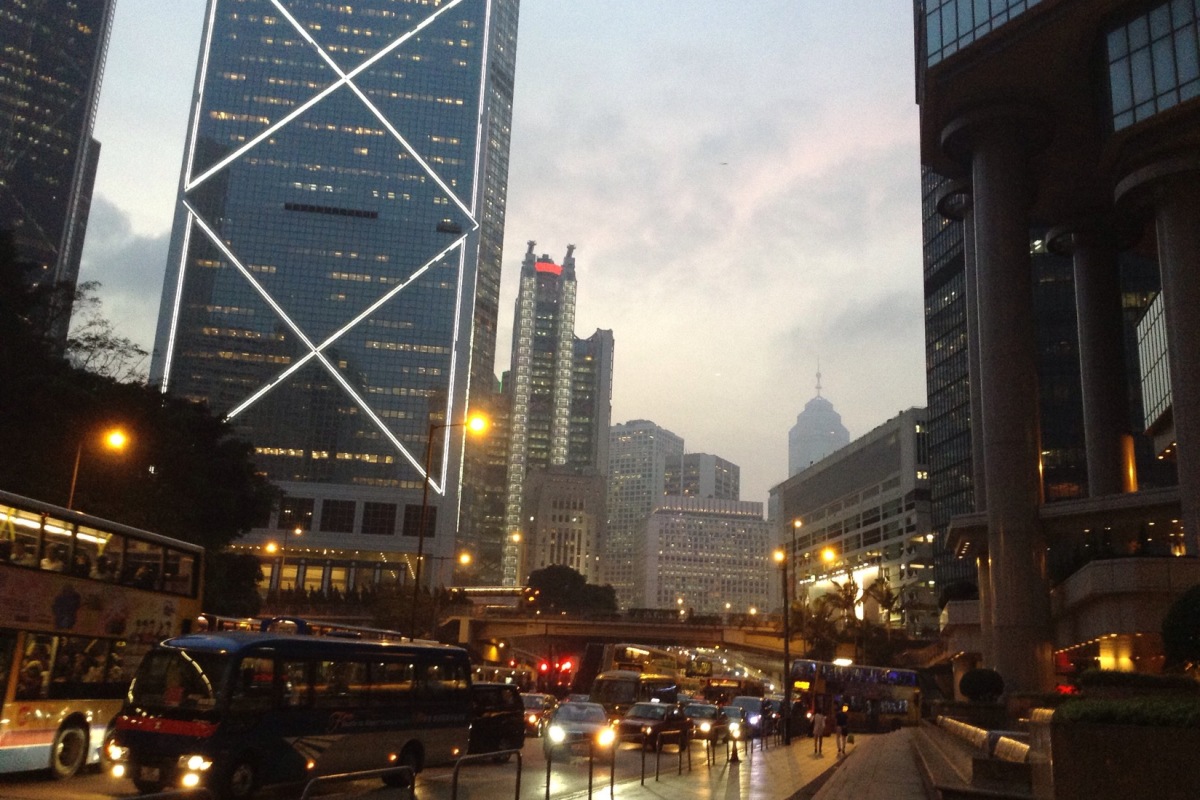 We felt like a visit to China would not be complete without seeing Hong Kong, so on Monday we flew from Taipei to HK, a quick two hour flight. So quick, in fact, that I didn’t even get to see the ending of the in-flight movie, The Judge. So now I don’t know how that ends.

We arrived, took the metro, and easily found our hotel. I had heard HK would be really expensive, but actually our hotel was quite reasonably priced- cheaper than Taipei or Macau.  And a really big room- a triple! It was located right on the historic 111-year-old  tramway, which costs 2.3 Hong Kong dollars- about 30 US cents. Pretty sweet ride around Hong Kong. 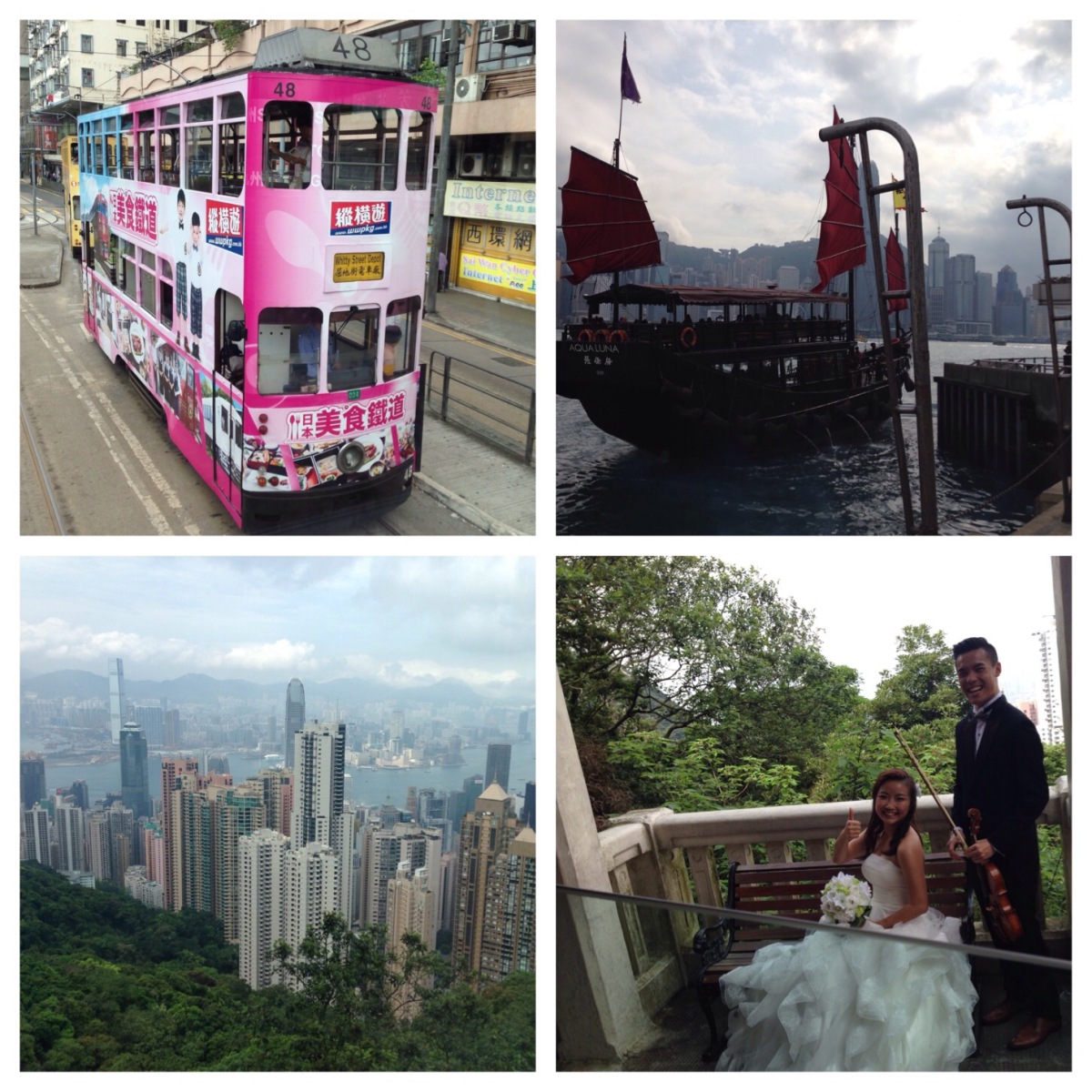 Besides shopping, there isn’t much to do in the city. We rode the tram from one end of the city to the other- slow going, it takes about 90 minutes. You get to see all the different flavors of the city as you go. We also took the cable car up to Victoria Peak, which features fabulous views of the city.  And a terrifying ride- going up and down this mountain, using a hundred year old system, at an angle of 27 degrees, which might not sound like a lot, but I assure you, it is.

We ate dim sum in Hong Kong- high on Chris’s list- and sushi- high on my list in any country.  We also had hot milk tea, cold milk tea, and a Hong Kong specialty, coffee tea.  Which is weird.

Our favorite outing was the Hong Kong Museum of History, which is actually in Kowloon.  The museum itself is fantastic, and tells the story of HK from prehistoric times, up through modern upheavals such as British colonization, the Opium Wars, occupation by the Japanese, and the return of Hong Kong to China in 1997.  A fascinating history.

We took the ferry to Macau, which was a Portuguese colony up until 1999. Seeing the old-style European buildings, mixed in with loads of huge casinos, is a bit jarring. We wandered around the historic center, looking at the sights such as the ruins of St Paul’s church, built in 1604. Looking closely at the only remaining wall (the rest burned in 1885), you can see statues of the Jesuits, the Virgin Mary,…. And Chinese lions and dragons.

We visited the casinos on the island of Macau- the casinos here bring in more money than Vegas.  Eight times more. One of the ones we visited features priceless art on loan from a Chinese billionaire. Fancy stuff.

Food specialties here include the pork bun, which is a pork chop stuck inside a crusty bun, Portuguese egg tarts (super delicious egg custard on a pie crust base), and bacalao com nata, a Portuguese dish of salted cod mixed with cream and potatoes. Really good, and one of my favorite dishes from when we lived in Angola, another former Portuguese colony.

The main reason we went to Macau was to say hi to a friend of mine, Chad, that I haven’t seen since we were teens.  Back then we were both involved in CATS, Creative Arts Theater and School, in Texas.  Chad is now the Resident Artistic Director for The House of Dancing Water, the most expensive theater show in the world ($250 million), produced by the same producer of La Reve and Cirque du Soleil in Las Vegas.  The show’s stage holds five Olympic swimming pools worth of water.  The show itself was amazing!! We sat in the 7th row, just far back enough to avoid getting soaking wet from all the diving into the water and all the splashing from the water jets and fountains. I can’t even begin to describe the show…… Only to say that it was a combination of a ballet, a water puppet show, Asian theater, tumbling, and a Pirates of Penzance kind of thing.  Seriously amazing. I was in awe the whole time. Chad told us later that several of their Aqua-batics go on to compete as divers at tournaments such as Red Bull, and several of their gymnasts have competed in the Olympics.

After the show, we got a tour of the backstage, from the pool area itself- how would  you like to be a stage hand that actually works in scuba gear?- up to the 8th floor above the stage, 75 feet high, where the pulleys and winches and wires are located that guide the sets and actors to their places- to the sixth floor, where the highest divers jump from.  Wow.

It was great to catch up with my friend, meet his wife, and get some valuable advice on traveling in China.  I think this is going  to be a hard country to get through, but we start tomorrow!

One thought on “Hong Kong and Macau: Worth A Trip”