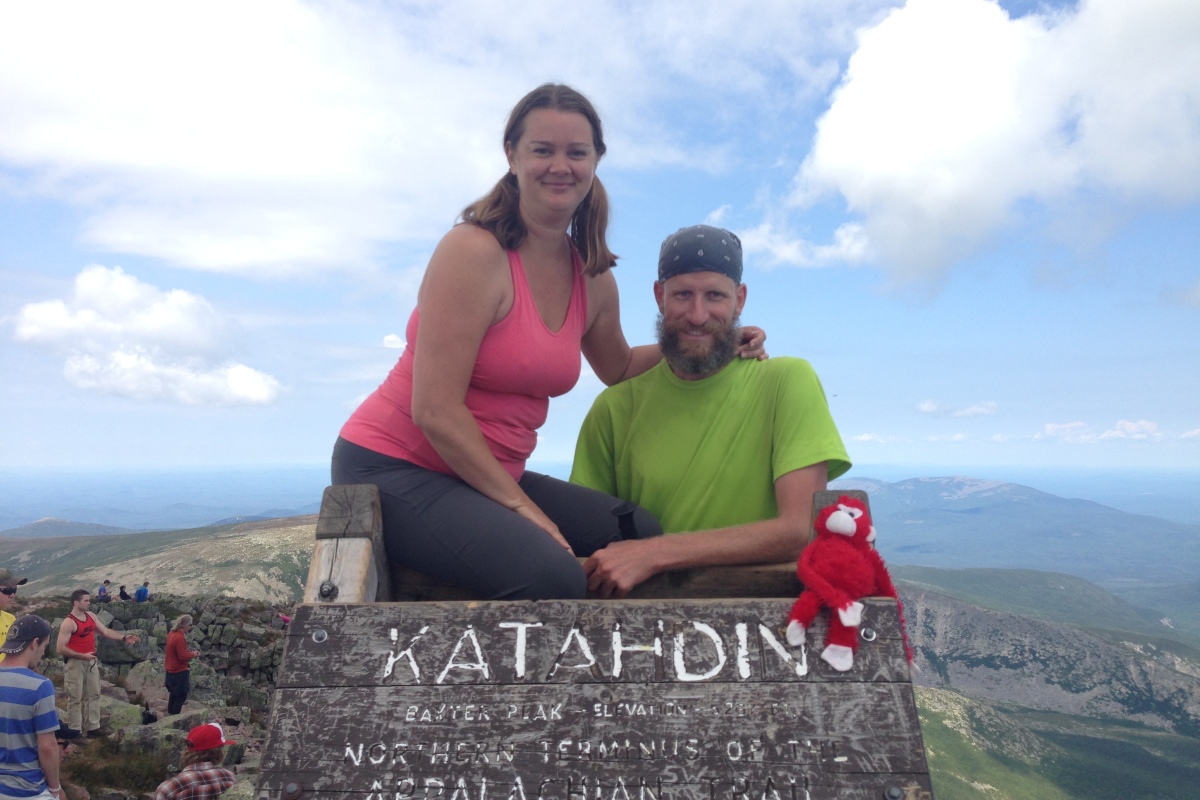 “Maine: The Way Life Ought To Be”. Also, really freaking hard. The Maine section of the AT is filled with ups, downs, rocks, roots, mud, and moose poop. Like literally every step is either a rock or a root (or both; somehow these trees manage to grow on rocks), or it’s a muddy bog, or there’s just piles and piles of moose droppings at every turn. There must be more moose in Maine than people. And in case you’re wondering how I know, yes, I do hike a mile or two with Chris in the mornings when I drop him off or in the afternoon when I pick him up.

The trail towns in Maine are Andover, with it’s cute little library and the Pine Ellis Hostel and their cabin down by the covered bridge; Rangeley, with it’s beautiful lakes and the awesome Rangeley Farmhouse Inn (hello Stacey and Shane, you guys were the best!!); Stratton, home of the Stratton Motel and the Wolf Den Bar and their infamous and slightly gross Wolf Burger; Caratunk, home of the Kennebec River ferry, and finally Monson, the site of The Lakeshore Lodge and Rebekah “Double Zero”, so named because so many people stop at her lodge and take two days in a row off the trail to recover from the last 2000 miles and prepare for the final push: the 100 Mile Wilderness.

While Chris started the 100 Mile Wilderness, I hung out with some travelers taking a zero, such as Trip and Sisyphus, and we went on a boat ride on Moosehead Lake (a three hour tour!!). Very nice lake filled with some 134 islands, many of which have a fishing cabin on the island or even in some cases a lake home. A lovely region- if you are ever in Maine, I truly hope you are able to get over to the lake side and not just the coastal region. Although I’m sure the coastline is amazing too. We’re going to check that side out on the way home.

While Chris was in the wilderness, I drove to the end at Millinocket and saw some old trail friends that we hadn’t seen in a while. Yay, for seeing Tittycakes, Geared Up, and DaVinci after they summited the peak!

Finally Chris came out of the 100 Mile Wilderness (it took him 5 days), and I was waiting at Abol Bridge Campground. We had dinner together and went to sleep early, as we were summiting Katahdin Mountain the next day. I drove to the base of the mountain, getting a head start on Chris, who had to hike the final 10 miles to the mountain AND do the climb while I just started the climb. It’s five miles to the top, which is at an elevation of 5, 260 feet. It took me five hours to get to the top. It was the scariest climbing I’ve ever done (well, I’ve never really done any rock climbing, which is why my arms, shoulders, and back are still hurting like hell today, three days later). It was so hard!! I cannot emphasize this enough. For a beginner like me, it was definitely the wrong mountain to try for my first attempt. For Chris and the other AT hikers, they did concur that it was the hardest mountain they had hiked/climbed on the AT. But finally, after five hours, I made it to the top (Chris caught up to me even with his extra 10 miles to get there).

We saw fellow hikers Lunch, Haiku, and Hiker Monkey up there. We all posed for the requisite photos, rested a bit, and then we had to do the descent…. which was even more terrifying!! Seriously!! Chris had to fireman carry/bear hug me down one tricky bit- I completely froze up and couldn’t move. But finally (after another five hours), we made it down. And so, the Appalachian Trail is completed. It took Chris 134 days, 3 hours, and 34 minutes to complete. Officially he was #186 to finish for the year. Although, that number is a bit inflated, because not everyone who hikes in to Baxter State Park and says they are a thru hiker really is one. But close enough. It’s done, and now we can go on to our Around The World Trip. We’ll be heading to Nova Scotia, New Brunswick, and Prince Edward Island in Canada, then back to DC for a quick stopover, then it’s off to Australia and new adventures!