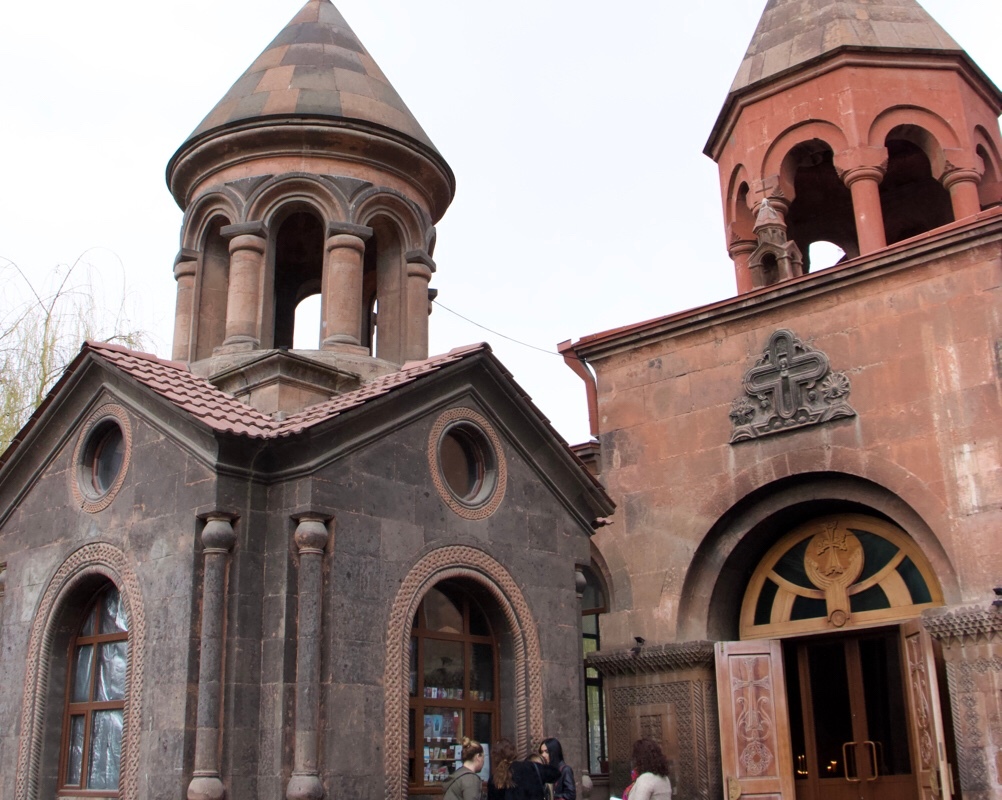 We’ve just passed the nine-month mark of our trip, and our travels have brought us to Armenia. Did you know there’s over 4000 monasteries in Armenia? That’s a lot! As the first country in the world to formally adopt Christianity, much of Armenia’s identity is tied to St Gregory the Illuminator, and his conversion of the king and the nation in 301 AD- as well as conflicts with empires of other faiths ever since.

We caught a minibus out of Tbilisi to come to Yerevan (one of those few occasions where we walk right up, and we’re the last two passengers the driver was needing for the run, so we left immediately- usually we wind up waiting ages and ages for the van to fill up). The van left from the Avlabari metro station and cost 35 Georgian Lari ($13 USD). Six hours later we were in Yerevan, with just a 20 minute stop at the border. American citizens do not need a visa for Armenia. As we passed through the mountains surrounding Yerevan, a light snow was falling, and our first few days in the city were a bit chilly and rainy- I was glad I had purchased a warm woolen scarf at a second-hand shop.

We went on a walking tour with Vako, one of the most knowledgeable guides I’ve ever had. Art, architecture, history, politics- he was a font of information as we traversed the capital city and then had drinks at a bar afterward. If you’re ever in Yerevan, be sure to sign up for his tour, which is free (you tip at the end however much you thought it was worth).

We got an apartment in Yerevan, and it was really nice to have some space to spread out and relax a bit. We spent more time wandering down smaller side streets, eating at basement tavernas and having coffee and sweets at cafes. We also visited the Cafesjian Center for the Arts twice, for a look at the beautiful art there, as well as the fantastic view of Yerevan from the hillside.

We took a public bus out to the small village of Garni, to see the Greco-Roman temple there. Dedicated to the god Mhir, it is the only temple remaining from that time period (1st c AD) in Armenia. Partially reconstructed, it has nonetheless withstood fires, earthquakes, and dozens of invading empires. From the Merecdes Benz bus station, just take matruyshka 226 to visit (250 dirhams, about 50¢, takes one hour).

From Garni, we shared an old Lada taxi with two other travelers to go further up the mountain to visit Geghardavank Monastery, a beautiful 4th century church that claims to have a piece of Noah’s Ark (which landed at nearby Mt Ararat) as well as a piece of the spear that the Romans used in the crucifixion of Christ. I didn’t see either of these relics, so I can’t say for sure that they are there, but I can say that it is a beautiful church carved into a rocky cave, and I’m glad we went. Our shared taxi to get us up there and back down to Garni was 3000 dirhams, split four ways ($1.50 USD each).

Historically an Armenian region, in the time of the Soviets this province was added to Azerbaijan on the maps, which caused big problems once the USSR broke down. In 1988, Soviet Armenia demanded the area be transferred to them, away from Soviet Azerbaijan. Over the next six years, roughly 35,000 people were killed as both sides fought it out. In 1994 there was a cease-fire, which remains to this day. Azerbaijan says the regions is theirs, and visitors are not allowed; but it’s quite easy to catch a bus from Yerevan in Armenia and visit (7 hours, 4500 dirhams – $9 USD from Kilikia Bus Station). When leaving Armenia and entering the “Republic of Artsokh” (which is defended by the Armenian army), visitors receive a slip of paper with the address of the Ministry of Foreign Affairs, where for 3000 dirhams you can get a visa (they won’t put it inside your passport, so as not to cause problems with Azerbaijan or their allies).

Did we visit? Well, I’m not saying, but here are some photos. It’s a beautiful region and some of Armenia’s oldest churches are there, as well as rolling hills, meadows, mountains, and picturesque villages.

And that was Armenia for us. We will enter Georgia one more time, spend a few days there, then head for Turkmenistan. I’ll be posting about Georgia in just a couple of days, so if you haven’t already, click the “Follow” button below to get a notification when I post a new one!

One thought on “Armenia 🇦🇲”