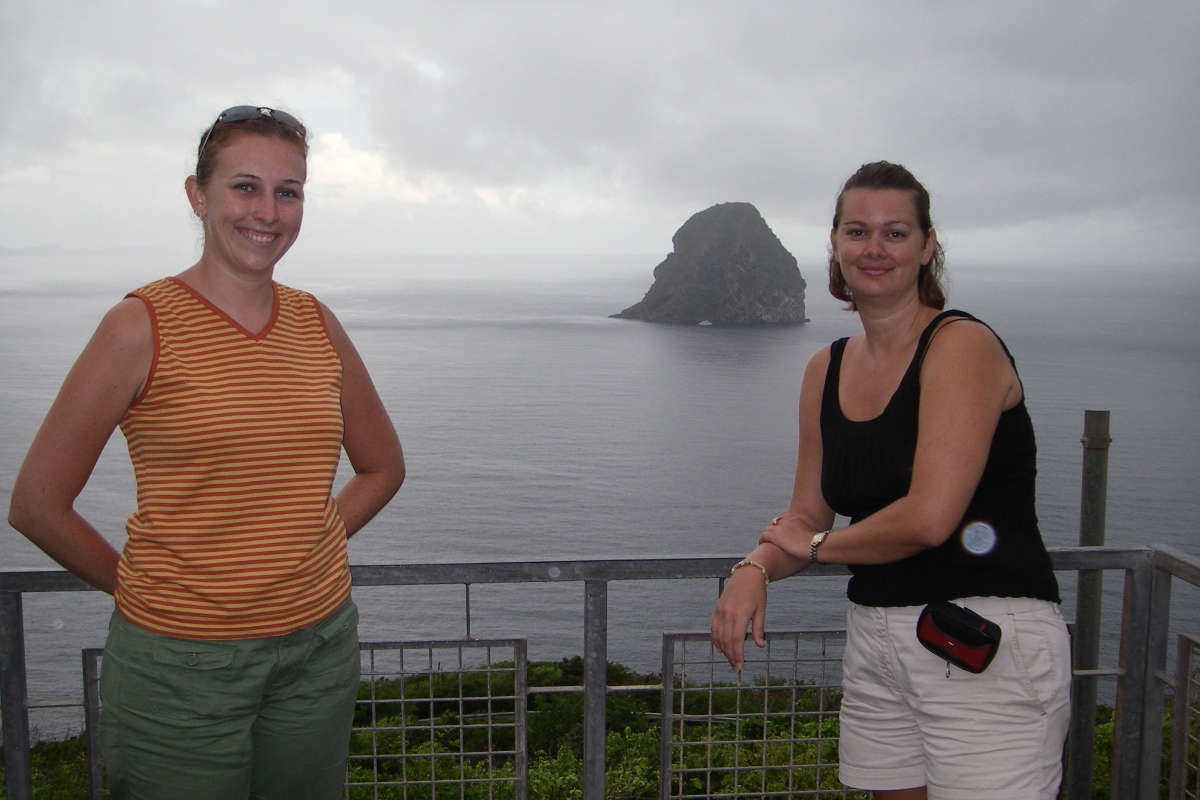 We drove to the airport with Tom and Sue and Jordan, and the maids and Desinor went with us to say farewell (okay, they just cared about the baby). We made sure we got there in plenty of time (didn’t want any repeats of the whole Vlad experience). We got on the plane and before we knew it, we were in Port-au-Pitre, Guadelupe, at the airport, with no idea where we were staying! Yeah, neither Lisa nor I did a lot of planning on this one.

The lady at the tourist office at the airport recommended a cheap hotel for us, and we got a cab. We spent the next three days exploring Guadelupe. We walked around some beaches, and visited a little artisan craft village. Unfortunately it was off-season, so a lot of stuff was closed. On our second day there we rented a car and drove all around. There are a lot of surf camps on the NE side of the island. I think it would be really cool to go to one of those for a month or so, learn how to surf.

Anyway, we rented a car and drove all around, visiting a rain forest, a waterfall, and some hot-water springs. We went to coffee plantation- mmmmm. Our last night there we went to a big reggae concert, where Shaggy was the headliner. Unfortunately, the crowd got totally out of hand and the concert was shut down . But, surprisingly, we saw Shaggy and his whole crew the next day- they were on our airplane to Antigua!

We did get to talk to the guys in the band on the flight- it was one of those tiny,25 seaters- but they were staying in Antigua and we were going on to Dominica. I think it was my favorite of the three islands. Our first day, we bussed over to Portsmouth and stayed there for a night. We found a cheap little guest house and walked up to Fort Shirley and visited there. I really liked looking at the fort, it was like something out of an old movie. You could just imagine the French or the British or the Spanish there. We met a local, Kevin, and he recommended a great place for dinner. He and his friend met us there and gave us a lot of interesting history of the place.

The next day, Kevin’s friend, Randolph, took us on a boat ride up the Indian River. He pointed out some places where Pirates of the Caribbean 2 were filmed. Very interesting flora and fauna there. Our “guide” was really knowledgeable. He pointed out all kinds of different birds and fish and trees.

That afternoon we bussed over to 3 Rivers Ecolodge. This is a really cool place. Anyone interested in going to Dominica should really check out this place- www.3riversdominica.com.  They have cabins, huts, and even tree houses you can stay in! Lisa and I had a great time there. Beautiful scenery, wonderful people, and plenty to do around there. I don’t think I’ve ever had a better swim than in the bathing pool where two of the three rivers meet.

We spent three days at 3 Rivers. We hiked, swam, saw baby turtles in the sand, ate mangoes and bananas and pineapple and coconut. The food there was wonderful, and all made right there. The cook made “tablette”, a coconut-type of fudge, for all of us. It was really fun, finding fresh-water streams and following them until they empty into the ocean, and the scenery was absolutely breathtaking.

But at last it was time to leave Dominica, and we headed off one more time to Martinique. Martinique was different from the other islands- very French. We stayed in the capital, Fort-de-France, at the cheapest little hotel imaginable. Lisa and I really outdid ourselves on this one. We had a good time walking around the little capital, kind of like walking around the French Quarter- small paved streets and lots of bars and cafes and shops. So nice to be able to have an espresso and pain au chocolate for breakfast. The water was beautiful, and we took a ferry over to Anse-de-Bout, where all the resorts are. Amazing beaches over there, and we got some laying around in the sun time.

One day we rented a car and drove all around the island. We visited St. Pierre, where the volcano Mt. Pelee erupted in 1902 and killed everyone there (except one guy who was in jail, survived, was pardoned, and later went and toured with Barnum & Bailey circus). Seeing the old town was really neat. We drove up almost to the top of Mt. Pelee. We also visited a rum distillery- very cool. We saw Green Diamond rock, a stunning rock out in the ocean, just off the coast. Wow, such amazing vegetation and water, what a great combination. We even got to visit Trois Ilets, the little town where Josephine was born, who would one day become Empress of France.
It seemed to come too soon, but sure enough, it eventually came time to go home. After a small fiasco at the airport (don’t want to talk about it), we made it back to Miami. Lisa went back to Haiti to see Vlad and pack some stuff for us, and I continued on home. I had lots of friends and family to see, and only three weeks before leaving for Nicaragua!
All in all, I’d say it was a fantastic vacation, and I’d recommend those islands to anyone who wants to tour the Caribbean. One word of advice- check the ferry schedule first, and don’t plan on flying with Lisa- she’s very bad luck at airports!